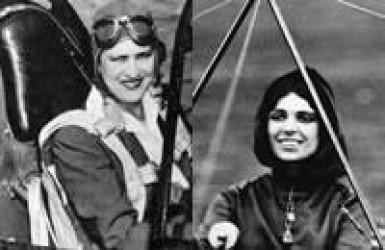 Women in History – 11 May
Jacqueline Cochran (May 11, 1906 – August 9, 1980) was a pioneer in the field of American aviation, considered to be one of the most gifted racing pilots of her generation.

She was an important contributor to the formation of the wartime Women’s Auxiliary Army Corps (WAAC) and Women Air Force Service Pilots (WASP).

Harriet Quimby (May 11, 1875 – July 1, 1912) was an early American aviator and a movie screenwriter. In 1911, she was awarded a U.S. pilot’s certificate by the Aero Club of America, becoming the first woman to gain a pilot’s license in the United States. In 1912, she became the first woman to fly across the English Channel. Although Quimby lived only to the age of thirty-seven, she had a major influence upon the role of women in aviation.

A historical marker has been erected near the now abandoned farmhouse in Arcadia Township, Manistee County, Michigan where Quimby was born. After her family moved to San Francisco, California, in the early 1900s, she became a journalist. She moved to New York City in 1903 to work as a theater critic for Leslie’s Illustrated Weekly and more than 250 of her articles were published over a nine-year period.

Quimby became interested in aviation in 1910, when she attended the Belmont Park International Aviation Tournament on Long Island, New York and met John Moisant, a well-known aviator and operator of a flight school, and his sister Matilde. On August 1, 1911, she took her pilot’s test and became the first U.S. woman to earn an Aero Club of America aviator’s certificate. Matilde Moisant soon followed and became the nation’s second certified female pilot.