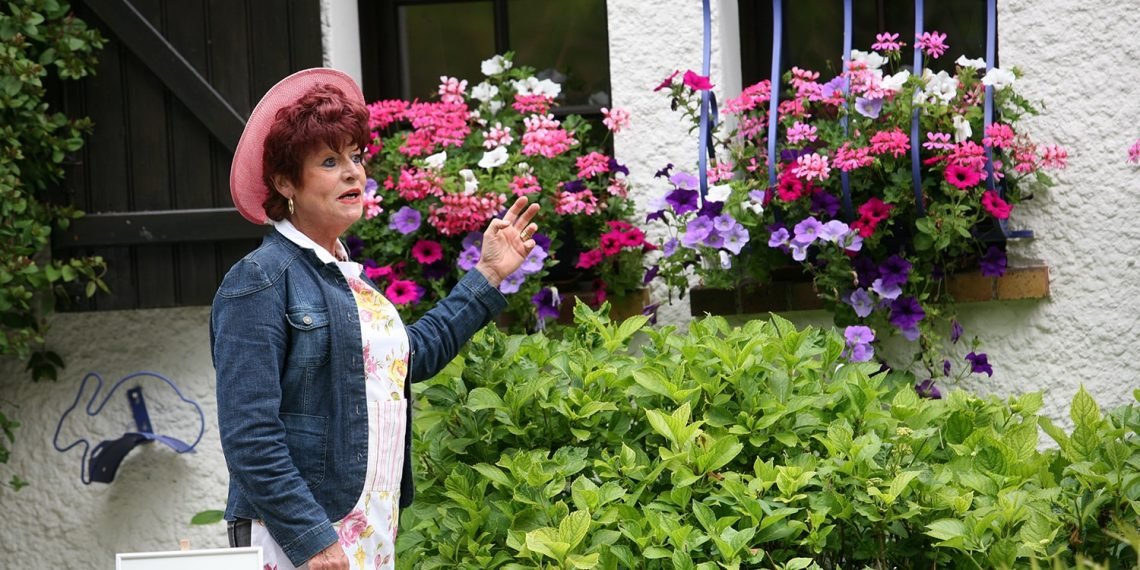 NCRI Women – The beautiful story of Marie-Lorette Guilloux from Auvers-sur-Oise in France and the Iranian Resistance was made through the difficulties and hardships that dot the path to freedom in Iran.

Marie-Lorette Guilloux whose superbly flowered house is at a stone’s throw from the headquarters of the Iranian Resistance in Auvers-sur-Oise, could have been satisfied to know these surprising neighbors from afar. She could have opted to pursue an already busy social and family life, between travels, grandchildren, theatre troupe and passion for the garden.

Marie-Lorette Guilloux, with her husband Jean-Pierre, listened only to their hearts, and this impulse “gave them the chance to give meaning to their lives”, as this retired engineer likes to repeat. When the doors of the Resistance house were closed, Marie-Lorette opened hers to all the activists who came to defend their movement in the Gords street by a long hunger strike. The heat wave was wreaking havoc in the month of June, Marie-Lorette brought water and ice to the hunger strikers.

On the day of the release of Maryam Rajavi, the President-elect of the Iranian Resistance, she was there in the crowd waiting for her with a bunch of flowers.

And since then, she chose to accompany the movement. Tirelessly, she fought the demonization campaigns waged by the press at that time and fueled by the mullahs’ regime. She made the Iranian Resistance known around her in the many networks she frequented.

Despite her multiple occupations, she participated in all the demonstrations, conferences and rallies across Europe as far as Washington, D.C., to get the Resistance off the European and U.S. terrorist lists.

With her husband, she defended her choices in front of the press, in conferences, with her friends who would be numerous to follow her.

In the middle of the Iraq war, she even went with a small group of residents of Val d’Oise (where Auvers-sur-Oise is located) to the city of Ashraf, twice, before the blockade and murderous attacks closed on the Iranian Resistance. Marie-Lorette believed in the human values on which the Iranian Resistance is based, particularly the equality between women and men that has been practiced for decades within the People’s Mojahedin Organization of Iran, an organization entirely led by women.

She cultivated life as she cultivated the flowers of her extraordinary, award-winning garden: with passion. She turned towards others, always with a smile to sow, a care to make it flourish, a warm care of friendship, which made every occasion a moment of generous sharing to make the Resistance known and to defend it. Her laughter, her energy, her joy of life and her sparkling eyes put balm in the heart.

Marie-Lorette Guilloux passed away on May 9, after a long battle against cancer, a war in which she never wavered and remained optimistic, defying time.

She has gained herself a place in Iranian history, full of roses of solidarity.

And as Maryam Rajavi said so well in her tribute to this great soul:

“My dear Marie-Lorette, my sister, you will remain forever alive in every heart beating for humanity and in every human being fighting for freedom.

And like the blooming flowers in your garden, you will be with us every spring.

And on the day of the Iranian people’s victory, your memory and your name will be proclaimed like those of all the people who have stood up for freedom and human rights.”