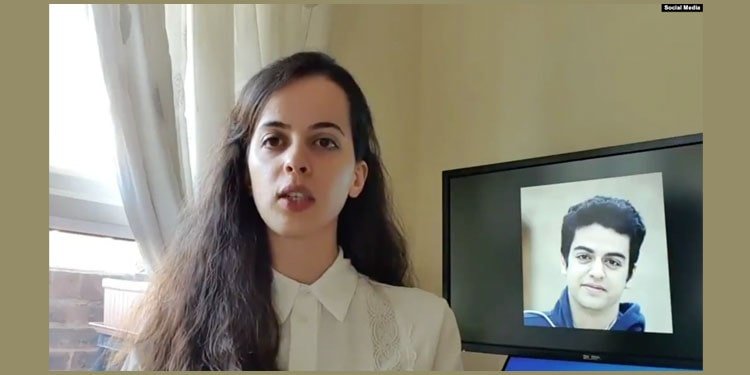 Agents of the clerical regime’s Intelligence Ministry have harassed and intimidated Aida Younesi with sexual and life threats if she continued her public efforts to have her imprisoned brother released. On May 11, 2020, Aida Younesi posted a tweet, addressing the regime’s Judiciary: “You violently broke in and took (my brother) away. And yet you cannot tolerate a 2-minute video clip responding to the baseless accusations of the Judiciary’s spokesman.”

Ms. Younesi pointed out that after reacting to the charges announced by Judiciary spokesman Gholam Hossein Esmaili, she had faced “insults as well as sexual and life threats,” adding, “Even some of their agents who are authorized to fire at will threatened to murder and execute me.” She reiterated, “In the absence of the rule of law in your so-called Islamic country, there is no place to file any complaint against you. But I have done so with the British Police.”

Ms. Younesi also revealed that her earlier video clip in response to the director of Bassij at Sharif Industrial University had drawn reaction from some officials who contacted her parents, and told them: “Tell your daughter to remove the video clip.”

Aida Younesi published a video clip on her twitter account on May 5, exposing the Intelligence Ministry’s conspiracy against her brother. She said in this clip: “No one expects any honesty from you (the Judiciary). The night (of the arrest) your agents said they had found nothing suspicious in our house. And the inspector of the case emphasized several times that there is no problem in Ali’s case… You do not have any evidence against Ali, because if you did you had already publicized it a hundred times.”

Iran nurses rise up to demand their unpaid salaries and fees