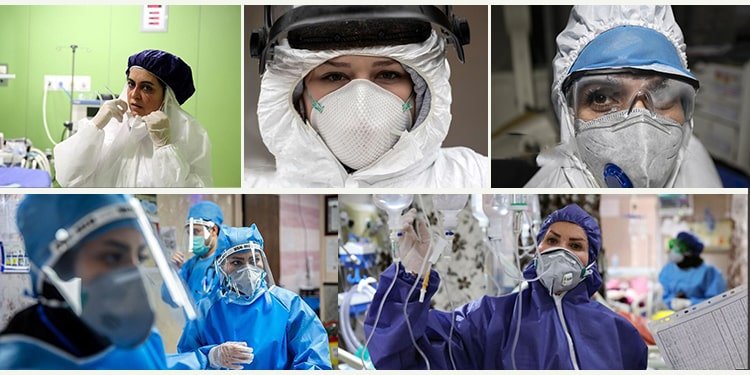 One can imagine the constant pressure on nurses and medical staff in Iran as the Coronavirus has plagued the entire country with the death toll exceeding 44,000. But the mullahs’ regime is literally exploiting them. 89-day contracts for nurses, non-payment of their salaries and even dismissal of nurses working on temporary contracts have led to widespread protests.

During the Coronavirus crisis, many nurses lacked protective equipment and have sacrificed their own lives trying to save patients, but the mullahs’ regime and the companies under their control only think of their own profits. In the wake of growing social discontent and the escalation of internal disputes at the top of the regime, state media have recently exposed the regime’s inhumane policies in the field of nursing, part of which are the 89-day contracts for nurses. Privatization of nursing profession and devaluating the workforce

“The policy of the Ministry of Health over the past seven to eight years has had two components,” the Secretary-General of Iran’s Nurse House, Mohammad Sharifi Moghaddam, told ILNA news agency. “One is to increase the supply, that is, the number of nursing graduates, and the other is to eliminate the job security of nurses. All of this is an attempt by the Ministry of Health to bring down the value of nurses’ workforce.” (The state-run ILNA News Agency – May 11, 2016)

Regarding the 89-day contracts for nurses, Sharifi Moghaddam said, “The 89-day contracts fall under the category of corporate law contracts, and have been used in public hospitals since 2014. This type of workforce has increased from zero to make up about 35 percent of the workforce in medical universities.”

Sharifi Moghaddam added, “In the past, the number of nursing graduates was 5,000 per year, but in recent years, we have had 12,000 nursing graduates every year. In fact, 60,000 individuals have graduated in the last five years, and in the most optimistic case, the Ministry of Health has hired 10,000 of them.” So, 50,000 nursing graduates have remained unemployed and are looking for jobs. Since they are unemployed, they will be obedient to the potential employer’s orders and even submit to exploitative deals such as the 89-day contracts.”

Aa for the contractor companies, he said, “The largest private company works under the auspices of the Ministry of Health, and it employs nurses on a contract basis.”

Corporate nurses have 89-day, six-month, and one-year contracts, but even those with a one-year contract can become unemployed sooner if they are notified one month in advance by their employer. That is, the nurses’ job security has completely vanished. There are also nurses in the Oil Ministry, private hospitals, clinics and charities who have been employed by such contractor companies. We, therefore, have tens of thousands of nurses who work without job security.”

According to Mohammad Sharifi Moghadam, the outbreak of Coronavirus was a good opportunity for the Ministry of Health to deal with the shortage of nurses through these unemployed nurses. They have not paid them any salary, and will let them go after the crisis. Some of these nurses were not even insured. No job security for nurses

Hossein Habibi, deputy chairman of the board of directors of the National League of Labor Councils, explained the situation with the 89-day contracts for nurses as the following: “When the Coronavirus crisis started, the Ministry of Health hired a number of nurses with the 89-day contract who may be laid off by late May, and even though some lost their lives, they have not yet received their March/April salaries. Many of these nurses may lose their jobs, soon. They do not have any promotional opportunities and some worked without health insurance.”  (The state-run ILNA News Agency – May 11, 2020)

“If the government is supposed to pay the salary of nurses, it should do so directly. Nurses are the ones who should receive the benefits, not the intermediary contractors,” Habibi said. “How much longer are the intermediary companies between the University of Medical Sciences and the work force going to cause all sorts of problems, such as delays in the payment of salaries and low amount of the pay? My co-workers have not been paid for exactly 51 days, today.”

In another part of his interview, Habibi added, “Short-term contracts are not supposed to deprive the work force of the rights and benefits enshrined in the labor law. If the nurses have a three-month employment contract, they should be given the same legal and common benefits for those three months. For example, if a state-owned company pays benefits directly to its labor force, such as transportation, food money, occasional bonuses and national and religious holidays, promotions, and any other benefits, these benefits must also be paid to the contract-based workforce.”

“If nurses who work under the Civil Service Management Act are paid according to a bracket and receive promotions, the contract-based nurses who work next to them in that hospital should also receive the same benefits,” he said.

Common violations of the labor law

According to Article 38 of the regime’s Labor Law, men and women must receive equal pay for equal work under equal conditions. Discrimination in determining wages based on age, gender, ethnicity, and political or religious beliefs is prohibited. In addition, according to Article 19 of the regime’s Constitution, the people of Iran, regardless of race or ethnicity, color, language, and the like should be treated equally.

Also, according to Article 20 of the Constitution, all members of the nation, men and women alike, are protected by the law and enjoy all human, political, economic, social and cultural rights in accordance with Islamic norms. Therefore, not granting common benefits to nurses under the 89-day contract is contrary to these principles of the Constitution and the Labor Code.

Habibi noted that the breach occurs mainly in contractors, noting that “even if the official nurse of the University of Medical Sciences is offered Coronavirus protective equipment, the exact same equipment must be provided for nurses with an 89-day contract and company. In fact, short-term contracts do not preclude legal and common rights.”

According to Article 148 of the Labor Code, all workshops covered by the law are required under the Social Security Act to send a list of names of their employees and provide for their employees’ premium. From the first day of the contract, the employer must insure the workers. If an accident occurs and the nurse becomes disabled, all benefits of the labor law must be paid to them.

But for years, the regime’s labor law has been nothing but pieces of worthless papers, and the looting policies of the corrupt clerical regime, including its privatization decisions, have exploited Iran’s work force, including nurses.