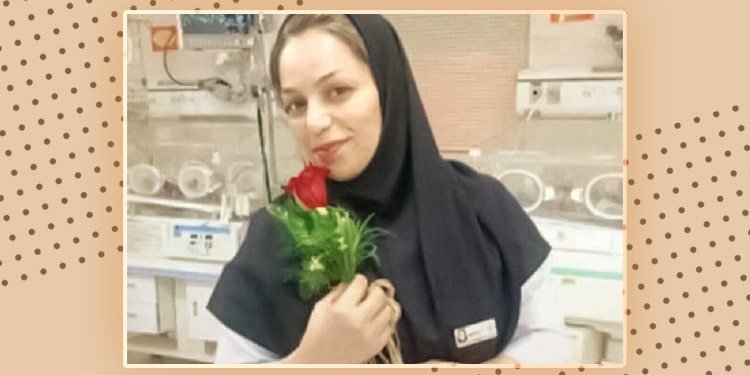 A nurse in Bandar Abbas, identified as Arezoo Bahou, succumbed to Coronavirus virus and passed away on Wednesday, May 27, 2020.

Arezoo Bahou had been among the hard-working nurses at Bandar Abbas Children’s Hospital. She was from Fin, the capital city of the Fin District of Bandar Abbas County in Hormozgan Province, in southern Iran.

Arezoo Bahou had been among the most prominent nurses of Hormozgan, hailed several times for being an “exemplary nurse” in the country (The state-run Donyay-e Eqtesad website, May 28, 2019).

At a ceremony honoring Iranian doctors and nurses on May 21, Qassem Jan-Babaei, Iran’s Deputy Health Minister, revealed the shocking statistic that more than 10,000 health care personnel had become infected with the Coronavirus.

He recalled the shortage of nurses in this city, compared to world standards, and asserted, “Based on global standards, four nurses are required for each hospital bed. However, on average, there is only one nurse for each bed in Mashhad Medical Sciences University.”

“We are far below global standards,” Gachpazan emphasized. Earlier, on May 14, he reported that female nurses constitute more than 65 percent of the total number of nurses in Mashhad hospitals (The official IRNA News Agency – May 25, 2020). The situation in Mashhad is so dire that the city has been classified as a “red zone.” Clearly, female nurses, exposed to the virus daily and working during extended shifts, face the greatest risk of exposure to and death from the Coronavirus.

Gachpazan said that there are about 450 corporate nurses in Mashhad.

Corporate nurses are nurses who have been exploited and given 89-day temporary contracts with no benefits. So far, many corporate nurses have not received their salaries while others have been laid off. These injustices have led to protests, including in the provinces of Gilan and Isfahan.