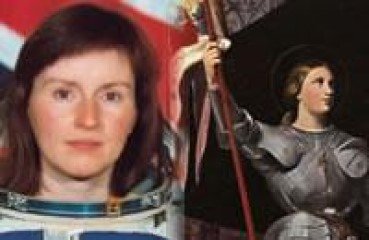 Dr. Helen Patricia Sharman (born 30 May 1963) is a British chemist who became the first Briton in space and the first woman to visit the Mir space station in 1991.

After responding to a radio advertisement asking for applicants to be the first British astronaut, Sharman was selected for the mission live on ITV, on 25 November 1989, ahead of nearly 13,000 other applicants. The programme was known as Project Juno and was a cooperative arrangement between the Soviet Union and a group of British companies.

Helen Patricia Sharman was subjected to a rigorous selection process that gave weight to scientific, educational and aerospace backgrounds as well as the ability to learn a foreign language.

The Soyuz TM-12 mission, launched on 18 May 1991 and lasted eight days, most of that time spent at the Mir space station. Sharman’s tasks included medical and agricultural tests photographing the British Isles.  She landed aboard Soyuz TM-11 on 26 May 1991, along with Viktor Afanasyev and Musa Manarov.

Sharman spent the eight years following her mission to Mir self-employed, communicating science to the public. In 1997 she published a children’s book, The Space Place. She has presented radio and television programs.

Joan of Arc (French: Jeanne d’Arc; 6 January 1412 – 30 May 1431), nicknamed “The Maid of Orléans” (French: La Pucelle d’Orléans) is considered a heroine of France for her role during the Lancastrian phase of the Hundred Years’ War.

On 23 May 1430, she was captured.  She was later handed over to the English, and then put on trial by the pro-English Bishop of Beauvais on a variety of charges. She was burned at the stake on 30 May 1431, dying at about nineteen years of age.

In 1456, an inquisitorial court، examined the trial, debunked the charges against her, pronounced her innocent, and declared her a martyr.

In the 16th century she became a symbol of the Catholic League, and in 1803 she was declared a national symbol of France.

Joan of Arc has remained a popular figure in literature, painting, sculpture, and other cultural works since the time of her death, and many famous writers, filmmakers and composers have created works about her. Cultural depictions of her have continued in films, theater, television, video games, music, and performances to this day.