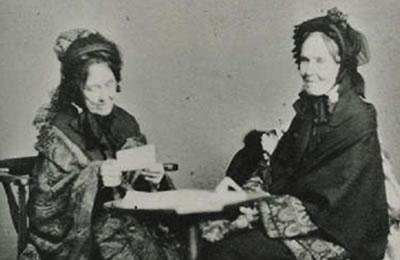 Abby Hadassah Smith (June 1, 1797 – July 23, 1879) was an early American suffragist who campaigned for property and voting rights from Glastonbury, Connecticut.

She was a subject of the book Abby Smith and Her Cows in which her sister Julia Evelina Smith told the story of their tax resistance struggle in the suffrage cause while the two were living at the Kimberly Mansion in Connecticut.

She was known to have kept a diary in both French and Latin. Smith’s mother had authored one of the earliest anti-slavery petitions presented to the United States Congress by John Quincy Adams. And the family was in support of her advocacy of education, abolition and women’s rights.

In 1872, the Town of Glastonbury attempted to raise taxes on the Smith sisters and two other widows in town. None of their male neighbors’ property values had risen so the sisters refused to pay the taxes without having been granted a right to vote in town meetings. The sister’s plight was first published in the Springfield, Massachusetts newspaper, The Republican, and soon newspapers across the country began to publish the story. They became quite famous yet still suffered discrimination by their town.

In 1873, she traveled to New York City to attend the first meeting of the Association for the Advancement of Women and protested taxation of disenfranchised women a month later. In January 1874, seven of her cows were seized and sold for taxes. She protested this seizure of property, but again in June 15 acres of pastureland was also seized for delinquent taxes. The sisters took the town to court and ultimately won their case. Helen Adams Keller (June 27, 1880 – June 1, 1968) was an American author, political activist, and lecturer. She was the first deafblind person to earn a Bachelor of Arts degree. The story of how Keller’s teacher, Anne Sullivan, broke through the isolation imposed by a near complete lack of language, allowing the girl to blossom as she learned to communicate, has become widely known through the dramatic depictions of the play and film The Miracle Worker.

She campaigned for women’s suffrage, labor rights, socialism, and other similar causes.

Helen Adams Keller was born with the ability to see and hear. At 19 months old, she contracted an illness described by doctors as “an acute congestion of the stomach and the brain”, which might have been scarlet fever or meningitis. The illness left her both deaf and blind. At that time, by the age of seven, Keller had more than 60 home signs to communicate with her family.

Anne Sullivan, a 20-year-old former student, who was herself visually impaired, became Keller’s instructor and she immediately began to teach Helen to communicate by spelling words into her hand, beginning with “d-o-l-l” for the doll that she had brought Keller as a present.

In 1904, at the age of 24, Keller graduated, becoming the first deaf blind person to earn a Bachelor of Arts degree.

Determined to communicate with others as conventionally as possible, Keller learned to speak, and spent much of her life giving speeches and lectures. She learned to “hear” people’s speech by reading their lips with her hands—her sense of touch had become extremely subtle. She became proficient at using braille and reading sign language with her hands as well.

Shortly before World War I, she determined that by placing her fingertips on a resonant tabletop she could experience music played close by.

Keller wrote a total of 12 published books and several articles.

Keller devoted much of her later life to raising funds for the  Foundation for the Blind. She died in her sleep on June 1, 1968, at her home.