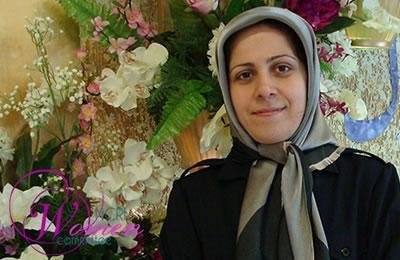 I was born on July 12, 1981, in Gorgan, a beautiful city in northern Iran. My birthday was 20 days after the major anti-government demonstration on June 20, 1981, that was brutally suppressed by the Iranian Revolutionary Guards. Many were shot dead, more were arrested and imprisoned, and others had to go underground. My mother was among the latter.

On March 12, 1983, my mother was spotted on the streets of Noor and was immediately arrested. At the time, I was only 20 months old and in my mother’s arms. Both of us were taken to Babol Prison.

And so, my childhood memories are comprised of growing up between the tall and cold walls of the prison, in small and dark cells, and among innocent, but strong women who were imprisoned. These women were incarcerated under horrible, inhuman conditions but had one thing in common: they were all very emotionally and spiritually strong, supportive, and hopeful.

One of my more memorable moments is a day when everyone made a “sacrifice” for me. I recall my mom telling me with excitement that our meal that day was kabob. Given the very poor food quality in prison, to have kabob was a major luxury. I was very excited but when I saw my plate, I was very disappointed to see that the kabob meal amounted to just one small piece of meat. So, I lost my appetite and left. But I was called back to the meal and when I returned I noticed that my plate was full of pieces of meat. All of my mother’s cellmates had decided to donate their small pieces of kabob to me. Having had a plate of meat inside the prison was one of my best childhood memories that I have not forgotten.

But that was a rare happy moment. Most of my childhood memories amount to growing up in prison and witnessing many fearful atrocities and painful news. I vividly remember a woman prisoner having a painful seizure after spending time in solitary confinement.

In 1984, my father was executed without having a chance to see me and kiss each other goodbye. Many parents were allowed to see their children before they were executed, but my father and I were deprived of that opportunity. My father, like my mother, was a freedom fighter. My only memory of my father is when he and I sat together in a small cell next to a plate with two apples on it.

I was in prison until age five. In 1985, my mom and I were released from prison and began living with my grandparents. I started school but my mind was filled with prison memories, the many brave women I had met, their pain and brave resistance, and their kindness. I could never forget those women. Very often, I would go back to my memories to commemorate those brave women and the difficulties they experienced. And those memories always motivated me to think of the injustices and suffering in the society.

I was in my third year as a university student in 2004 studying Construction Management when I had the opportunity to join a family in visiting Camp Ashraf in Iraq. That’s where I met the freedom fighters and instantly decided to join them. I’ve been with them since then.

Joining Camp Ashraf and the freedom fighters provided the same warmth I had experienced when I was among the women prisoners during my childhood years. These freedom fighters were kind, loving, and very hopeful, and helped me maximize my potentials in fighting for freedom and continue the path that my father and mother had started. Specially now that we witness the uprisings all over Iran, I see the image of my father and the many other martyrs of freedom, looking at me and telling me that they did not die in vain.

I look at my presence within the ranks of Iranian resistance fighters, especially the female freedom fighters, each with a history like mine and I feel very proud to be among them.

The Iranian regime and its founder, Khomeini, wanted to stop and silence us. They imprisoned, tortured, and executed thousands of us, but we never surrendered to their rule. Their brutality and repression did not destroy us; on the contrary, it strengthened and made us more determined. I proudly feel most liberated and ready to take my country back.