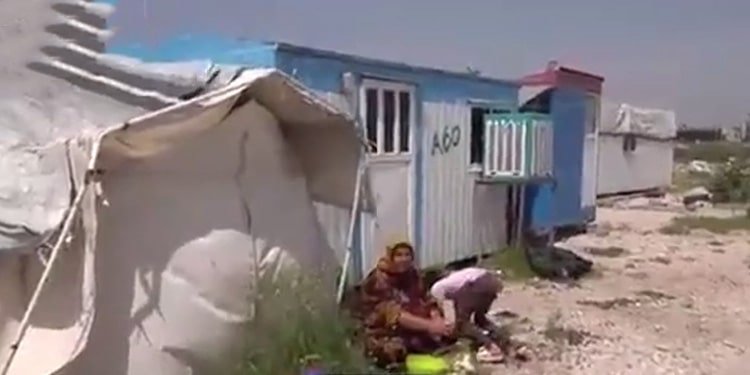 2.5 years after the Kermanshah earthquake, women still live in trailers

More than 2.5 years after the Kermanshah earthquake, a large number of people still live in makeshift trailers or sheds in Kermanshah province, including Sarpol-e Zahab.

People in these trailers do not have even basic living standards and are often deprived of water and electricity. The government has not taken any formal action to help these people.

In a short video report from one of the neighborhoods in the city of Sarpol-e-Zahab, several women offered some insights into their daily challenges. One of the women said, “Today is April 21, 2020. Here is the Nirouy-e Entezami neighborhood of Sarpol-e Zahab. It’s been 891 days since the earthquake, but we still live in trailers. There are several families here. We have been without water and electricity for three days now. They [local officials] don’t want us to stay here anymore because of the conditions. I have a one-month old baby, whom I had to leave at home with one of my relatives. My husband is unemployed, and we have zero income.

“I don’t know what to do now. It’s very hot outside, and the situation is really difficult.”

Turan Hemmati, another woman who introduced herself, is in one of these makeshift trailers.

“We are here, and we have no facilities,” she said, adding that her husband is ill and that they have no income.

Kermanshah province is considered a “red zone” relative to the COVID-19 pandemic, yet 2.5 years after the earthquake, homeless women and their young children are still deprived of the most basic necessities of life.

The death toll from the 8.0-magnitude earthquake in Japan can be counted on one hand, but in Iran, earthquakes of lesser magnitude destroy vital public infrastructure and kill a large number of people (The state-run Tasnim News Agency – June 4, 2020).

One of the fundamental needs of women, and from which she derives other basic needs such as security, health, dignity, and other basic human rights, is a dignified home.

The housing crisis that the earthquake-stricken women of Kermanshah are experiencing reflects the living hell the religious dictatorship has subjected the Iranian people to for 40 years. Farhad Faghihi, Deputy Minister of Reconstruction and Rural Housing of Kermanshah Province, provided data on the extent of the damage to residential units. According to the data, the earthquake of 2017 destroyed 12,500 rural and 7,500 urban housing units.

The government official, however, left unanswered a major question: How will the government solve problem of homeless people.