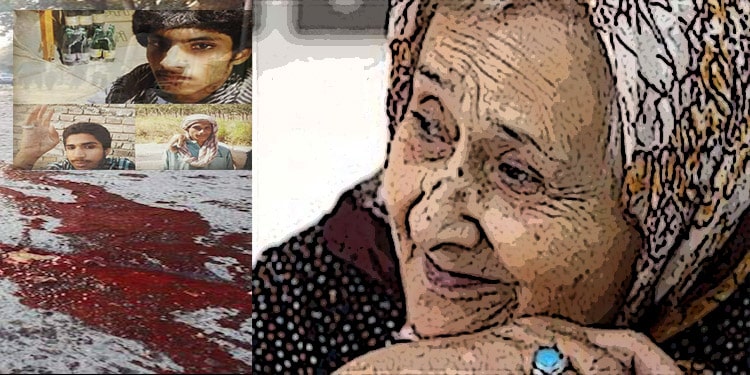 Soheila Shirvani, the bereaved mother of two young men slain in Iranshahr, is seeking justice under an oppressive regime. In a public message, she called on the people of Iran to make her voice heard everywhere.

Soheila is from Iranshahr, a town in Sistan and Baluchestan Province, in southeast Iran.

On Wednesday, May 6, 2020, the State Security forces (SSF) raided the home of the Baluch family in Asadabad neighborhood of Iranshahr. The SSF forces shot the two brothers at close range, killing them both.

Ahmad Pourian, the brother of Mohammad and Mehdi Pourian, 18 and 20, respectively, spoke about the SSF raid, saying that his brothers had been asleep when SSF forces raided their home. The troops woke up the two brothers, beat and killed them.

“After Mohammad and Mehdi were beaten – before our mother’s eyes – Iranshahr SSF forces ordered them to flee. Mehdi started to run, but he was shot in the back and killed. Mohammad refused to run. He was shot dead inside his home in front of his mother,” Ahmad added.

According to Ahmad Pourian, his mother was also beaten during the raid. Having witnessed the killing of two of her sons, she suffered a heart attack. Meanwhile, Ahmad’s father suffered a nervous breakdown.

Soheila Shirvani posted her audio message online on Thursday, June 12, announcing that she was seeking justice for her sons.

The bereaved mother of two slain young men said in her message, “I am pursuing in court the matter of the killing of two of my children. The court told us that the murder of my children was ordered by Golmohammadi, and the [SSF] forces did so on his orders.”

Mohsen Golmohammadi is the Public and Revolutionary Prosecutor of Iranshahr. Ms. Shirvani objected to the court’s failure to assign the case, and the circumstances under which the court failed to act.

“Because of the Coronavirus, no one leaves the house to even buy bread. But I’m not afraid of the virus. I’ve lost two children. I am always in this court or that SSF station. Every morning after I wake up, I go to this or that office. Why did you make my life miserable? Why did you break my heart? Why did you destroy me? You killed my soul. I am a mother,” she said in another part of her message. “God, these are the oppressors who rule over us. You are the great God, so take revenge on them… Make my voice heard everywhere…”