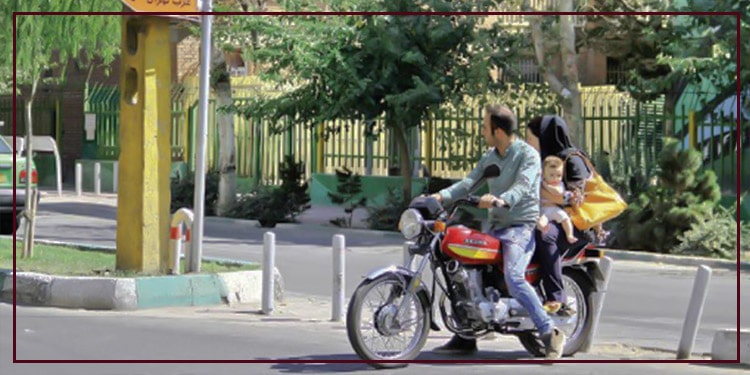 The moribund clerical regime has once again ramped up pressure on Iranian women using the pretext of the mandatory Hijab. The State Security Force (SSF) announced it will prosecute female pillion riders. The SSF also imposed further restrictions on drivers who drop their veils behind the wheel.

Rahimi declared, “The State Security Force (police) in Tehran has received a new mandate to deal with motorcyclists who break the rules. The SSF will deal with offenders during the week, and especially on Thursdays.”

Thursdays in Iran are like Friday nights in the West.

Stressing that “the Police will not compromise with any immoral behavior,” Rahimi added that “motorcyclists who break the norms will be seriously dealt with.” (The state-run Aftabnews.ir– June 14, 2020)

Earlier, on June 10, 2020, the regime took another step to increase pressure on Iranian women. Women who drop their veils behind the wheels also received new threats by Ali Zolghadr, the head of Tehran’s Security Police.

Zolghadr announced, “Drivers who receive text messages saying, ‘Car owner! Someone dropped her veil in your car,’ must immediately report to one of the centers of the Security Police. It makes no difference in which city you are when you receive the text, and if the breach took place in another city. The owner and the person who drives the car must refer to a Security Police Center and if the removal of the veil was verified, they must sign written pledges.” (The state-run Mashreqnews.ir – June 10, 2020)

Zolghadr said the new plan is called, “Systematic Impounding of Cars” and added, “Those who commit the crime of removing their veils or if they have objections (to the text message) must report to a police center within 10 days. The system is designed in a way that if a person does not report to the police to sign a pledge, their car would be impounded in the system… People who have a record of more than four or five arrests in the system will be turned in to the Judiciary immediately.” (The state-run Kayhan daily – June 10, 2020)