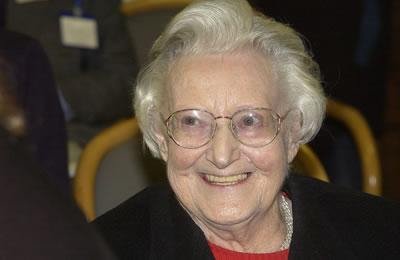 Dame Cicely Mary Saunders OM DBE FRCS FRCP FRCN (22 June 1918 – 14 July 2005) was an English Anglican nurse, social worker, physician and writer, involved with many international universities. She is best known for her role in the birth of the hospice movement, emphasizing the importance of palliative care in modern medicine.

Saunders was instrumental in the history of UK medical ethics. Dame Cicely Mary Saunders was an advisor to Andrew Mephem whose report led the Rev. Edward Shotter to set up the London Medical Group, a forerunner of the Society for the Study of Medical Ethics, later the Institute of Medical Ethics. She gave one of the first LMG lectures on the subject of pain, developing the talk into “The Nature and Management of Terminal pain” by 1972.

This went on to be one of the most often repeated and requested lectures of the LMG and other such Medical Groups that sprung up around Great Britain, where it was often given as their inaugural lecture. Her talk on the care of the dying patient was printed by the LMG in its series, Documentation in Medical Ethics, a forerunner of the Journal of Medical Ethics.