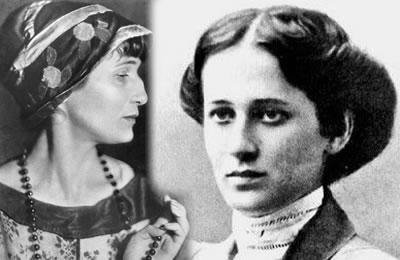 Anna Andreyevna Gorenko (23 June 1889 – 5 March 1966), better known by the pen name Anna Akhmatova; Russian, was one of the most significant Russian poets of the 20th century. Anna Andreyevna Gorenko was shortlisted for the Nobel Prize in 1965 and received second-most (three) nominations for the award the following year.

Akhmatova’s work ranges from short lyric poems to intricately structured cycles, such as Requiem (1935–40), her tragic masterpiece about the Stalinist terror. Her style, characterized by its economy and emotional restraint, was strikingly original and distinctive to her contemporaries. The strong and clear leading female voice struck a new chord in Russian poetry. Her writing can be said to fall into two periods – the early work (1912–25) and her later work (from around 1936 until her death), divided by a decade of reduced literary output.

Primary sources of information about Akhmatova’s life are relatively scant, as war, revolution and the totalitarian regime caused much of the written record to be destroyed. For long periods she was in official disfavor and many of those who were close to her died in the aftermath of the revolution. Akhmatova’s first husband, Nikolay Gumilyov was executed by the Soviet secret police, and her son Lev Gumilyov and her common-law husband Nikolay Punin spent many years in the Gulag, where Punin died. Wilma Glodean Rudolph (June 23, 1940 – November 12, 1994) was an American sprinter from Clarksville, Tennessee, who became a world-record-holding Olympic champion and international sports icon in track and field following her successes in the 1956 and 1960 Olympic Games.

Rudolph was acclaimed the fastest woman in the world in the 1960s and became the first American woman, and the first African American woman, to win three gold medals in a single Olympic Games. Due to the worldwide television coverage of the 1960 Summer Olympics, Rudolph became an international star along with other Olympic athletes such as Cassius Clay (later known as Muhammad Ali), Oscar Robertson, and Rafer Johnson who competed in Italy.

As an Olympic champion in the early 1960s, Rudolph was among the most highly visible black women in America and abroad. She became a role model for black and female athletes and her Olympic successes helped elevate women’s track and field in the United States.

Rudolph is also regarded as a civil rights and women’s rights pioneer. In 1962 Rudolph retired from competition at the peak of her athletic career as the world record-holder in the 100- and 200-meter individual events and the 4 × 100-meter relay.

After competing in the 1960 Summer Olympics, the 1963 graduate of Tennessee State University became an educator and coach.