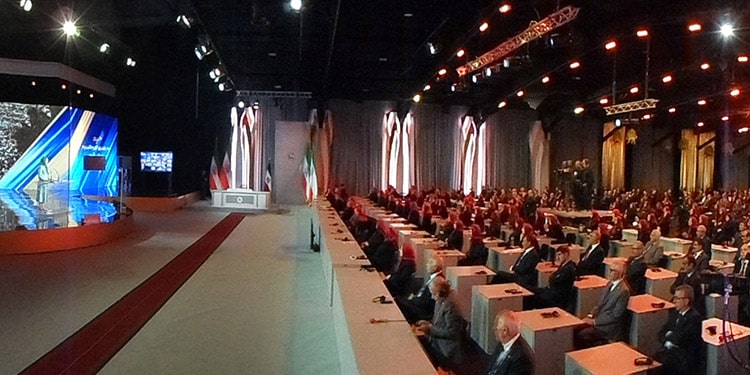 Iranian women’s leadership was lauded on the anniversary of the beginning of the Iranian people’s Resistance on June 20, 1981.

June 20, 1981, is a turning point in the struggle of the people of Iran against the ruling regime of the mullahs. It is also the Day of Martyrs and Political Prisoners.

On Saturday, June 20, 2020, an international conference was held online inter-connecting some 2,000 locations around the world and Ashraf 3 in Albania. Members of the Iranian communities in different countries, as well as political personalities, members of parliament, human rights defenders and supporters of the Iranian Resistance participated in this conference.

The keynote speaker in this gathering was Maryam Rajavi, President-elect of the National Council of Resistance of Iran. Mrs. Rajavi noted in her speech the impact of the events on June 20, 1981, in the Iranian people’s democratic struggles.

In part of her speech, she said: “In Iran’s contemporary history, there has never been any development like June 20, 1981, which clearly drew a profound line between the camps of freedom and tyranny in Iranian society… Without June 20, 1981, and the roaring river of the blood of its martyrs, the demand to overthrow the regime in its entirety would not have become so prevalent… The series of anti-regime uprisings in recent years are the logical and historical continuation of the blood-drenched line drawn on June 20, 1981. The uprisings which began in December 2017 and culminated in the fiery uprising in November 2019…”

In another part of her speech, Mrs. Rajavi reiterated women’s equal rights in tomorrow’s free Iran: “Complete gender equality in political, social, cultural, and economic rights, and equal participation of women in political leadership; abolishment of any form of discrimination; the right to choose one’s clothing, and to marriage, divorce, education and employment; prohibition of all forms of exploitation against women under any pretext.”

A number of prominent women from across the world and Iranian women representing the country’s generation equality spoke to the conference. In her speech to the conference, Baroness Sandy Verma, member of the UK House of Lords and former Minister for International Development, said: “Today, the regime is terrified by the organized Resistance movement and the growing support for the NCRI and its president-elect Maryam Rajavi inside Iran, especially among the younger generation. That fear was on display, when the regime’s Judiciary recently admitted the arrest of two Iranian elite students for connection to the PMOI, which is the driving force in the organized Resistance movement… They are spreading hope and the message of the NCRI President-elect, Maryam Rajavi, that a free, secular and democratic Iran based on rule of law and gender equality is within reach.

“The proud and brave people of Iran deserve a better, prosperous future and my colleagues and I in the UK Parliament will continue our cross-party advocacy and support the Iranian people’s democratic aspirations, the NCRI and the popular struggle for change until Iran is free.” Rama Yade, former French Minister of Human Rights, also talked to the participants in the international conference. She also referred to Iranian women’s leadership role in the resistance movment: “Forty years of fighting for democracy, for freedom, for equality… Your sacrifice has been great…

“The consecration of women is your victory. PMOI puts women, wives, mothers, sisters at the heart of its work, because it knows what women have brought to Iran and that Iran would not be this great civilization without women.”

Member of the French Parliament, Michèle de Vaucouleurs, pointed in her speech to the tragic honor killings in Iran sanctioned by the clerical regime’s laws: “I wish to speak particularly about Iranian women and girls who are specially oppressed. Just one month after the murder of Romina Ashrafi, another four women became victims of honor killings in Iran. These killings are carried out with the protection of the Sharia law. One of the regime’s laws prosecutes the killer only if the he is not the woman’s father or paternal grandfather.” Another speaker to the conference was Dr. Margarita Durán Vadell, Spanish historian, journalist, and senator (2009-2015). She told the conference: “I think the most important message we could give to the Iranian people is that freedom and democracy is not far, and the international community has also recognized the wish and the will of Iranians for a regime change.” Dr. Prof. Rita Sussmuth, speaker of the German Bundestag (1988-1998) and former federal minister, also addressed the Iranian Resistance’s international conference. In part of her remarks, she noted Iranian women’s leadership: “The people who have lived in a system that knows no freedom or little freedom for so many decades, show others that they are thirsting for freedom…

“Living in partnership, equality, so that women in society can have a different status, a different level of recognition that has been missing for a long time and is still not available in a number of countries before you recognize someone as a man or a woman you in him the man, the strong male and the weak female sex are not valid. But both are people and your shining example is Ms. Rajavi, because her main goal is equality, equal evaluation and equal recognition of women and men and not only in subordinate positions, but in leadership positions. By taking responsibility and running the affairs, (you women) are showing people show that you are not helpless. Equality between men and women is your most important asset for sustainable freedom and democracy in Iran and all around the world.” Representing witnesses to the clampdown on the demonstration on June 20, 1981, Massoumeh Malek Mohammadi, deputy Secretary General of the People’s Mojahedin Organization of Iran (PMOI/MEK), also spoke to the meeting. In part of her speech, she said: “Like tens of thousands of other PMOI members and supporters, I spent the early years of the 1980s in jail. Very little has been said about what Khomeini’s mercenaries and henchmen did in Evin and other prisons. But hardly anyone knows of the resistance and steadfastness of our sisters in these torture chambers. The epical resistance of prisoners in the 1980s, the executions of 100, 200, 300, and even 400 PMOI members in one day, those 30,000 political prisoners who adhered to their cause and chose the hanging noose, all of them are episodes of the story of the generation borne on June 20, 1981, and the resistance which was borne on that day. Like any other momentous task, this resistance was also very difficult in the early days, but more difficult and more glorious is preserving it.”