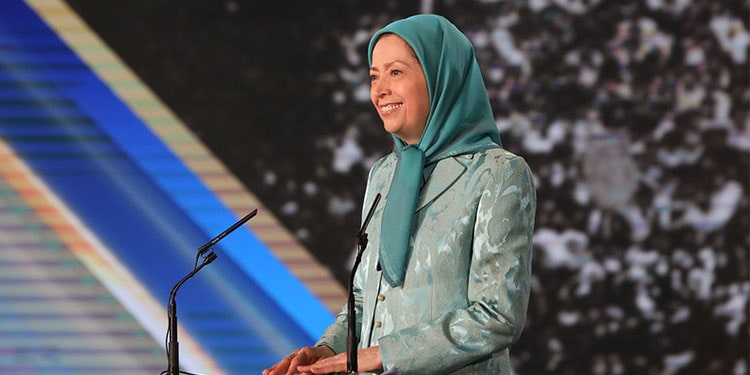 The invincible generation borne on June 20, 1981, will turn the page of Iran’s history. This is according to Maryam Rajavi, the NCRI President-elect, who addressed an international online conference on June 20, 2020, the 40th anniversary of the beginning of the Iranian people’s resistance against the mullahs’ religious dictatorship.

In parts of her speech to this virtual meeting connecting 2,000 locations around the world and in Ashraf 3 in Albania, she addressed the status of women in the Iranian Resistance and in future Iran. Excerpts of her speech follow:

The day after June 20, 1981, Khomeini’s Revolutionary Prosecutor published the photos of teenage girls supporting the PMOI/MEK who had been executed. He urged their families to go and identify the bodies of their children because they had not given their names, instead only identifying as “Mojaheds” (PMOI/MEK) and when asked. And they chanted, “long live freedom,” until the final moment before being shot by firing squads.

Publishing those photos in daily newspapers back then, revealed, before anything else, the cold heartedness and the ruthlessness of Khomeini and his Revolutionary Guards.

The passage of time, however, revealed a greater truth: Those young girls, those clenched fists, those cries of “long live freedom,” and their refusal to even tell their names to their executioners, created a new and admirable example in the context of revolutions; the new model of an unsung hero, innocent, but ready to make the ultimate sacrifice, something diametrically opposed to Khomeini. And, most importantly, they set an example for remaining firm on their beliefs, for being uncompromising and for persevering; in a historic sense, it can be summed up in one word: invincible.

They were the forerunners of a new generation who stepped onto the field of struggle and revolution. They broke through the barriers of the time, and rose up to resist against the most daunting reactionary force in Iran’s history… A new generation stepped in, intent on paying the price for freedom from the onset.

My beloved Marjan who passed away earlier this month and whose art and commitment to struggle were praised by millions of our compatriots, said the following about her time in prison (in the early 1980s): “I met a young woman in prison, who was 24 or 25 years old. Her name was Shahin. She had been brought to the ward just after giving birth to her baby girl at Evin’s hospital. She named her daughter, Soulmaz, as her husband had asked before being executed. Soulmaz was his sister’s name who had been killed by the regime on September 27, 1981.”

Marjan added: “When the henchmen were taking Shahin for execution, she kissed little Soulmaz on the forehead. The baby was asleep and in the arms of her mother, she looked just like the drawing of Saint Mary by Michael Angelo. I could not take it anymore. I covered my face with my hands so that no one would hear me cry. I regained control over myself when Shahin caressed me on the head. For a moment, I gazed at her calm face and sombre smile. She placed little Soulmaz in my arms and walked away.”

Such scenes have been repeated thousands of times in the torture chambers of Khomeini and Khamenei….

The rebellious generation which has risen up in the current uprisings of the people of Iran, has blossomed out of the rightfulness of those sacrifices….

If it were not for the June 20, 1981 uprising, a democratic alternative could never have emerged against this regime… A revolutionary generation, particularly with thousands of combatant and rebellious women, would not have emerged to turn the page in Iran’s history as it has done today. There would have been no breakthroughs for women’s equality and emancipation….

The resolution signed by the majority of members in the U.S. House of Representatives, which has recognized the Iranian people’s right to the establishment of a democratic republic based on the separation of religion and state provides a credible model for all governments and the international community to follow regarding Iran and the Iranian people…

The spirit of this resolution can be summed up in supporting the right of the Iranian people to change the regime and to achieve a democratic republic. It states that the Iranian people have rejected the monarchical dictatorship and, as well, do not accept religious tyranny and oppose it. It also references and points to the Iranian Resistance’s Ten-Point Plan, which reflects the image of a free Iran:

As we mark the 40th year of the struggle against religious tyranny, the Iranian Resistance renews its commitment to the Iranian people and to the 120,000 martyrs for freedom…