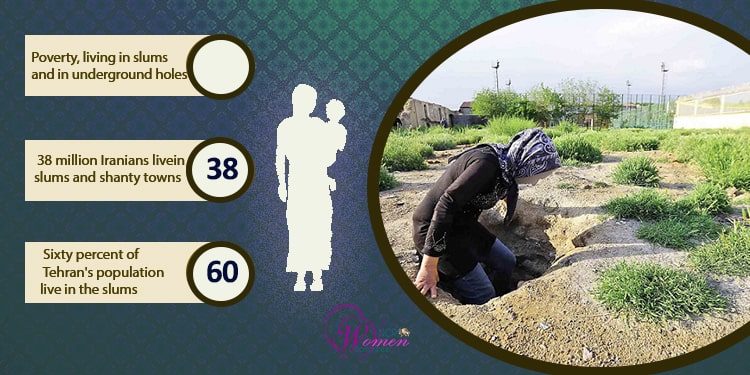 Some women heads of household have taken refuge in city outskirts due to poverty and lack of adequate housing. They live in tunnels and holes underneath dilapidated buildings.

These women are part of Iran’s at least 38 million people who live in shanty towns and slums.

Sleeping on the streets, or even in empty graves – and now in underground holes – are among the phenomena the mullahs’ regime has imposed on Iranian society.

More than 80 percent of Iranians live below the poverty line due to the regime’s predatory policies. According to regime experts, the face of poverty in Iran is feminine.

“Some women heads of household often live in ruins, dilapidated buildings, underground holes, and water wells, mostly because they are homeless. Some of those who live in slums or tents do not have proper accommodation,” said Mohammad-Reza Mahboubfar, a social researcher, in a statement to state-run media (The state-run website Etemad Online – June 22, 2020).

“The number of women heads of household in the country has also increased. These people are facing many problems due to homelessness and inflation, and lack of basic necessities such as jobs and housing. Some of these women are forced to emigrate to the suburbs where they are vulnerable to various social ailments such as violence, addiction, (forcing them into) selling their babies and prostitution. They are deprived of social support from official institutions. Even among those who have “decent” jobs, some women heads of household live below the poverty line and are deprived of minimum living standards,” Mahboubfar added.

Referring to the shocking increase in the population of Iranians who live in slums and shanty towns, Mahboubfar said, “It was estimated in the past that there were about 25 million residing in the slums, but today that number has risen to 38 million. We can even say that population of slum dwellers in Tehran has increased by 60%.”

According to the social researcher, “Before the Coronavirus, the poverty line was 8 million Tomans… Most slum dwellers, day laborers, seasonal workers, peddlers, and so on, have lost 70 to 80 percent of their salaries. It is natural that they go to the city outskirts to seek housing and shelter. Part of the city outskirts consists of slums; the other part consists of tents or other deficient shelters. Homeless people have built makeshift, unsanitary settlements that generate crime.”