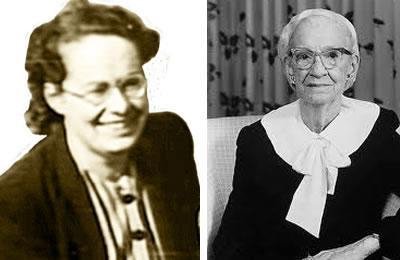 Joan Elisabeth Lowther Murray, MBE (24 June 1917 – 4 September 1996) was an English cryptanalyst and numismatist best known for her work as a code-breaker at Bletchley Park during the Second World War. Though she did not personally seek the spotlight, her role in the Enigma project that decrypted Nazi Germany’s secret communications earned her awards and citations, such as appointment as a Member of the Order of the British Empire (MBE), in 1946.

Joan Elisabeth Lowther Murray attended Dulwich High School for Girls in south London and won a scholarship in 1936, to attend Newnham College, Cambridge, where she gained a double first degree in mathematics and was a Wrangler. She was denied a full degree, as Cambridge only awarded these to men until 1948.

The GCCS started up in 1939 with only one purpose, to break the German Enigma Code. The Enigma Code was a machine the Germans invented to encrypt their messages, they strongly believed their machine was unbreakable. Clarke first arrived at Bletchley Park on 17 June 1940. She was first placed in a group only made up of women referred to as “The Girls”, that mainly did routine clerical work. At this time, cryptology was not a job for a woman. According to Clarke, she only knew of one other female cryptologist that worked at Bletchley Park.

On 4 September 1996, Murray died at her home in Headington.