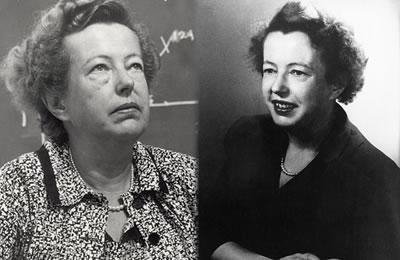 Maria Goeppert Mayer (June 28, 1906 – February 20, 1972) was a German-born American theoretical physicist, and Nobel laureate in Physics for proposing the nuclear shell model of the atomic nucleus. She was the second woman to win a Nobel Prize in physics, after Marie Curie.

Maria Goeppert married Joseph Edward Mayer and moved to the United States, where he was an associate professor at Johns Hopkins University. Strict rules against nepotism prevented Johns Hopkins University from taking her on as a faculty member, but she was given a job as an assistant and published a landmark paper on double beta decay in 1935.

In 1937, she moved to Columbia University, where she took an unpaid position. During World War II, she worked for the Manhattan Project at Columbia on isotope separation, and with Edward Teller at the Los Alamos Laboratory on the development of the Teller’s “Super” bomb.

After the war, Goeppert Mayer became a voluntary associate professor of Physics at the University of Chicago (where Teller and her husband worked) and a senior physicist at the nearby Argonne National Laboratory. She developed a mathematical model for the structure of nuclear shells, for which she was awarded the Nobel Prize in Physics in 1963, which she shared with J. Hans D. Jensen and Eugene Wigner. In 1960, she was appointed full professor of physics at the University of California, San Diego.

Speech by Ingrid Betancourt to the International Conference at Ashraf 3