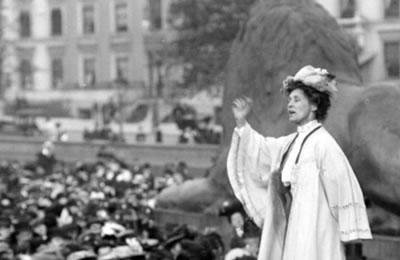 Emmeline Pankhurst (15 July 1858 – 14 June 1928) was a British political activist and leader of the British suffragette movement who helped women win the right to vote. In 1999 Time named Pankhurst as one of the 100 Most Important People of the 20th Century, stating “Emmeline Pankhurst shaped an idea of women for our time; she shook society into a new pattern from which there could be no going back”.

Born in Moss Side, Manchester to politically active parents, Pankhurst was introduced at the age of 14 to the women’s suffrage movement. On 18 December 1879, she married Richard Pankhurst, a barrister 24 years older than her known for supporting women’s right to vote; they had five children over the next ten years. He supported her activities outside the home.

In 1903, five years after her husband died, Pankhurst founded the Women’s Social and Political Union (WSPU), an all-women suffrage advocacy organization dedicated to “deeds, not words”.

The group identified as independent from – and often in opposition to – political parties. It became known for physical confrontations: its members smashed windows and assaulted police officers. Pankhurst, her daughters, and other WSPU activists received repeated prison sentences, where they staged hunger strikes to secure better conditions.

She died on 14 June 1928, only weeks before the Conservative government’s Representation of the People Act (1928) extended the vote to all women over 21 years of age on 2 July 1928. She was commemorated two years later with a statue in London’s Victoria Tower Gardens.