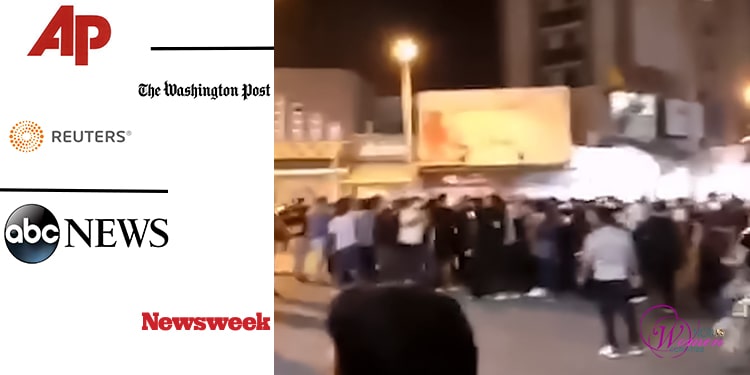 The protests of people in Behbahan on Thursday evening, July 16, where at least one young woman, Farzaneh Ansarifar was arrested, were covered by the world press. Reuters news agency covered the incident with the following headline: “Iran security forces fire tear gas to disperse protesters”.

Reuters wrote, Iranian security forces fired tear gas on Thursday to disperse demonstrators gathered in the southwestern city of Behbahan, witnesses told Reuters, and there was a heavy presence of forces in other cities.”

According to Reuters, “Videos posted on social media from inside Iran showed protesters chanting, “Fear not, fear not, we are in this together”. Some protesters chanted slogans against top officials”.

About the heavy presence of regime security agents, the news agency wrote, “Videos posted on Twitter showed a heavy presence of security forces in several cities, including Tehran and Isfahan…Witnesses in Behbahan said there had been several arrests in the city.”

The Associated Press reported the protests of people in Behbahan under this headline,

The news agency then added that the internet line had been cut off by the authorities. “Internet-access advocacy group NetBlocks.org reported the disruption.

About the protests and slogans against the regime, Associated Press wrote, “Videos showed demonstrators chanting slogans heard at other protests in Iran over the last year, including: “Don’t be afraid, we are all together.” Others targeted Iran’s foreign policy, shouting: “No Gaza, no Lebanon, I will die for Iran.”

The Washington Post also covered the protests in Behbahan. The newspaper wrote, “One video verified by The Associated Press shows a crowd of dozens of people in a square in Behbahan, shouting: “An Iranian will die, but will never accept humiliation.”

Referring to the protests in Behbahan, ABC News pointed to the suppression of the protests by the State Security Forces. ABC wrote, “Behbahan’s police chief, Col. Mohammad Azizi, later was quoted by Iranian website jamaran.news as confirming a protest took place beginning at 9 p.m. Thursday. He said police “firmly dispersed” the demonstrators, who rallied over the economy.”

Newsweek magazine covered the protest in Behbahan amid the Covid-19 crisis and wrote, “Iranian security forces are trying to suppress fresh anti-government protests in the country as the regime grapples with a series of mysterious explosions… and the COVID-19 coronavirus pandemic.”

Newsweek added, “Videos posted to social media from Behbahan showed protesters chanting, “Fear not, fear not, we are in this together,” while other reported chants against top regime officials including Supreme Leader Ali Khamenei, and chants apparently critical of Iran funding of militant groups across the Middle East.”