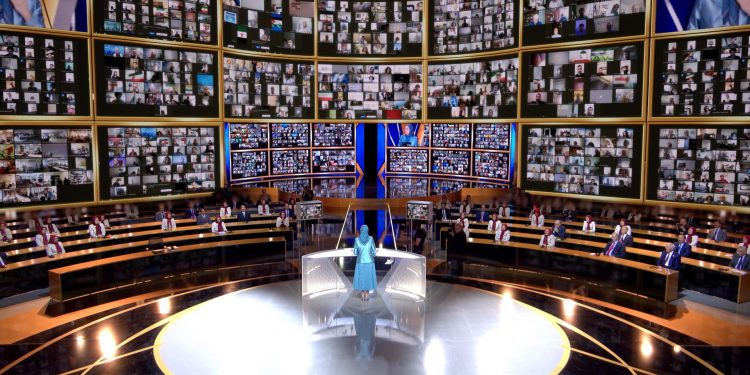 1,000 political leaders, parliamentarians, and religious and cultural figures from around the world, including hundreds of prominent women attended the event

The online gathering connected Iranians at 30,000 locations in Iran, in Ashraf-3 in Albania as well as in more than 100 countries on 5 continents.

This gathering, held online due to the Coronavirus pandemic, was the largest gathering of its kind in support of a free Iran.

In addition, a large demonstration in Berlin and rallies and demonstrations by Iranians in various cities around the world joined the gathering, while complying with restrictions imposed due to coronavirus pandemic.

Some 1,000 dignitaries, including political leaders, parliamentarians, as well as cultural and religious figures, including hundreds of prominent women participated in the gathering, supporting the Iranian people’s call for the overthrow of a religious dictatorship and Mrs. Maryam Rajavi’s 10-point plan for a future Iran.

She stressed the need for a comprehensive strategy across countries and the private sector to enable the citizens of Iran to achieve a free Iran. She also stressed on the need to ensure that the people of Iran can share social media influence campaigns.

The next speaker was Anna Fotyga, member of the European Parliament and former Foreign Minister of Poland. In her remarks to this virtual conference, Ms. Fotyga said, “We know that even under very difficult circumstances exacerbated by covid-19 you maintained courage, determination and resolve to fight for your own country. I’m absolutely sure that your combat will bring success, to bring freedom, liberty and well-being to all people living in Iran.”

Mrs. Maryam Rajavi, the President-elect of the National Council of Resistance of Iran (NCRI), was the keynote speaker to the rally. She began by saluting the rebellious people of Behbahan as well as the millions of compatriots who rose up in a tweet-storm to show their outrage against the inhumane death sentences of young protesters arrested during the November uprising.

Also, the night before, the people of Behbahan staged protests, chanted against the regime, and confronted the onslaught of the repressive forces.

In her remarks, Mrs. Rajavi emphasized that from all indications, the ruling theocracy is in a position to be overthrown. She said: “We seek freedom and justice and a democratic, secular, and non-nuclear republic. Our people must enjoy the right to be healthy, to have shelter, employment, to organize and form syndicates, to have autonomy of ethnic minorities, the right to equal participation in running the society’s affairs, gender equality and popular sovereignty, and an Iran where there will be no capital punishment.”

Reminding that the coronavirus had so far taken the lives of at least 72,000 people in Iran, Mrs. Rajavi said: “The abnormal surging trend of the number of coronavirus victims in Iran is a product of the criminal policies of (the mullahs’ supreme leader, Ali) Khamenei and (his president, Hassan) Rouhani. The strategy of launching mass casualties as a barrier against the threat of an uprising and eventual overthrow is exactly designed to pacify and dishearten the Iranian society, rendering it hopeless and paralyzed… The regime’s Health Minister says that since the beginning of the outbreak (in February), for the first time only 300 million Euros was provided to the ministry in June. That is only 3.5 Euros per person to confront the pandemic.” 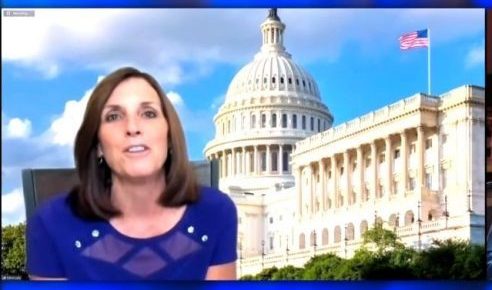 U.S. Congresswoman Martha McSally from Arizona, told the Free Iran Global Summit, “I just want to say today we are with you. The freedom loving people of Iran, we are with you and we stand with you. God created us all with the desire to be free and so grateful for all of you to stand up for the Iranian people and our God given freedom. I’m also grateful for your focus on equal participation of women in the political, social, and economic future of Iran.”

The next prominent woman to address the Free Iran Global Summit 2020, was the former French Minister of Foreign Affairs, Defense and Home Affairs, Ms. Michèle Alliot-Marie. She re-affirmed her admiration of the Iranian Resistance movement, adding, “My personal will as a woman, is to see women in Iran. They can contribute to the nation with their intelligence and studies. They have a new outlook, a new way of treating the citizens, and particularly the more vulnerable including children. Because those who are the most vulnerable, always pay the highest price.”

Addressing Maryam Rajavi, Ms. Alliot-Marie said, “You are an example for all women all over the world and it is very important to follow the example of your fight.”

Dr. Ranjana Kumari, Director of the Centre for Social Research, India, is one of the 100 most influential people in gender policy for 2019. She was among the prominent women who addressed the conference.

Dr. Kumari told the conference: “The people of Iran started a series of protests last year that turned a page in your country’s history. The pivotal role of Iranian women was very telling. Their courage was a source of inspiration for women all over the world… So, allow me to join my sisters in the resistance inside Iran and tell you that, you shall win! I know that whatever may be the regime, how so-ever undemocratic it may be, people’s voices cannot be silenced.”

The Hon. Linda Chavez, former White House Director of Public Liaison, was also connected to the Free Iran Global Summit 2020 from Washington, D.C. In part of her brief remarks to the conference, she said: “Why is it that the regime fears Madam Maryam Rajavi? Is it because she has tanks? Because she has guns? Because she has soldiers who are going to attack the regime? No, it is not for any of those reasons. It is for the simple reason that she stands for ideas of liberty. That her ten-point plan is the best hope for the freedom of the Iranian people. She has been a beacon in the wilderness to gather together those who support a free Iran in which the people of that country can enjoy equal freedoms, equal rights before the courts, they will have the power to assemble, the right to express their own views and the right to worship as they choose.”

The former Secretary of State for Environment and Northern Ireland and Member of the UK Parliament also addressed the Free Iran Global Summit 2020, which she said was a “very important online conference in support of human rights, democracy, and freedom in Iran.” The Rt. Hon. Theresa Villiers told the participants in the summit, “I want to send my very best wishes to the NCRI and to the President-elect Maryam Rajavi for her inspirational work on the international scene on behalf of the people of Iran at this very difficult time…”

In another part of her remarks, she said, “(The conference today is) a crucial opportunity for us to ask democracies, to urge the international community, including the UK government, to keep up the pressure on this brutal, oppressive regime. And it is also an opportunity to send a message of support and solidarity to the people of Iran so that they know that we stand with them at this terrible time, and so that they know that we share their goal for a free and democratic secular Iran, where the rule of law is observed and human rights are respected.”

Former Senator and New Hampshire Attorney General, Kelly Ayotte, addressed the Free Iran Global Summit from the U.S. She said, “We all stand with the people of Iran… I want to thank Maryam Rajavi and the NCRI for your courage and your sacrifice in opposing the mullahs and standing up for the people of Iran… We know that the people of Iran support your vision. We have seen and heard from Iranians from all walks of lives and backgrounds… To the Iranian people, we will not let your voices be silenced.”

The Honorable Judy Sgro, Member of Parliament from Canada, also expressed her support for the Iranian Resistance and the Iranian people’s uprisings. In part of her speech, she said, “For those of us who have known your movement and participated for many years, who have been with you in all of the challenges through these hard years, your courage and dedication have become more than ever obvious… The pure presence of such a continued organized movement, gives not only the people of Iran hope, but all who have long advocated for a free and democratic Iran.”

Ms. Ingrid Betancourt, the former presidential candidate in Colombia, began her remarks by “saluting the young people and the freedom fighters that are taking all the risks in Iran to end the tyranny of the mullahs.”

Referring to the worldwide connections in the Free Iran Global Summit, Ms. Betancourt said, “What impresses me today is that with this digital display and amazing technology that we are experiencing through this worldwide webinar, we are witnessing that we are united and the voice who is uniting us, the heart that is uniting us, is Maryam Rajavi. She is the one that inherits the history of the democratic struggle in Iran… It is because we believe that she is the only one that can guarantee to the Iranian people that they will not be betrayed again.”

In her remarks to the Free Iran Global Summit, the former French Human Rights Minister, Rama Yade, said, “In the history of the National Council of Resistance of Iran, July 17 will be special. Today we are participating in the world’s largest virtual gathering. I’m very impressed, one hundred and two countries, 30,000 different locations, two hundred meetings with 50 to 3000 participants… which shows the determination of this movement to continue its fight despite the exceptional health conditions.”

In another part of her remarks, Rama Yade added, “This organization proves… how discipline and method are necessary conditions for the mobilization and success of its dream for a free and democratic Iran.”