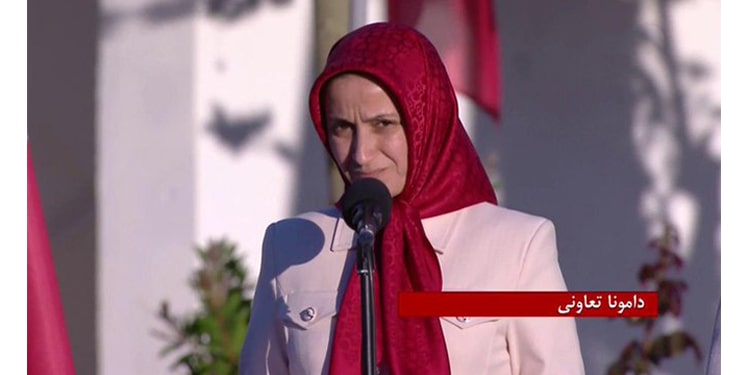 Damona Taavoni: Anyone who said yes, was executed. Anyone denied, survived

My name is Damona Taavoni. My father was executed in the 1988. My mother was a political activist and I was arrested with her twice to experience prison as a child. When I went to prison for the second time, I was only 6 years old.

I remember the blindfolded prisoners sitting with bleeding foot outside the doors of interrogation rooms. I remember the voices I heard from the prisoners shouting and crying out while they were being tortured.

One year later my father was arrested for the third time. And I was almost sure, what will happen with him.

I was 10, when one day my mother told me that he has been executed.

As I grew up, I would hear very inspiring stories about the high spirits of the victims of that massacre, where each prisoner was asked just one question in a one-minute of trial. The question was: Do you support the MEK? Anyone who said yes, would be executed. Anyone denied would survive. I am not sure such an epic can be found in any other movement where not just one person, but 30,000 said Yes!

I was curious to know how my father turned that page, the moment he was asked. I wrote letters to numbers of prisoners who were in prison in that time and I received 3 letters. I got one from one of his best friends, cellmate from the prison.

He wrote, after your father was taken into the courtroom; we were watching the scene through the keyhole in the door. It took only a few minutes we saw two guards grab your father’s arms and drag him on the ground to the death corridor. We never found out what he told them at that moment, but It turned out that he had been severely beaten.

I remember my feeling when I read these sentences. On one hand, I shed tears because I dearly loved my father. On the other hand, I was proud of him when I realized that he chose with dignity to be executed for sake of his people and freedom of our country rather than submission.

It is always hard for me to talk about myself, while I know that there are 30,000 most of their stories are unknown and the names are unknown.

The only reason I dare to stand here, is to be the voice of them who never talked and are only numbers and we are still seeking for their names and for their families.

But I am sure about one thing and what their message was. They all loved the beauty of their life so much that they could not accept to enjoy it themselves while other were forbidden. They made the decision to sacrifice their lives so no one should have to sell their bones and eyes for food in our country.

We Iranians cannot be known with a bunch of medieval antihuman mullahs.

We are known by those 30,000, which includes young girls from 13 years old and elderly women who were 60 years old. Those whose blood runs in the veins of every single Iranian here in Ashraf3 and those rise up in the streets of Iran every day in our country.

Now, I would like to say to Khamenei, Ra’isi, Rouhani, and the rest of those who involved in the 1988 massacre and are still in power, I would say: Fear these names! The 30,000 have multiplied, and you hear their echoes every day in Iran’s streets.

The horrific crimes you are committing everyday only add to our determination for overthrowing your regime.

and the day is near when every single of you will be held accountable.

Finally, on behalf of myself and all the MEK members I would like to commend Mrs. Rajavi, the one who has made all these sacrifices come to fruition; over the past 40 years she has kept our struggle alive and ablaze with her own continuous sacrifices in every minute; she has taught us how to extend our compassion to our people by creating a pattern of highest human relationships among ourselves.

I promise to you that I will hold fast to these values and sacrifices just like you did.