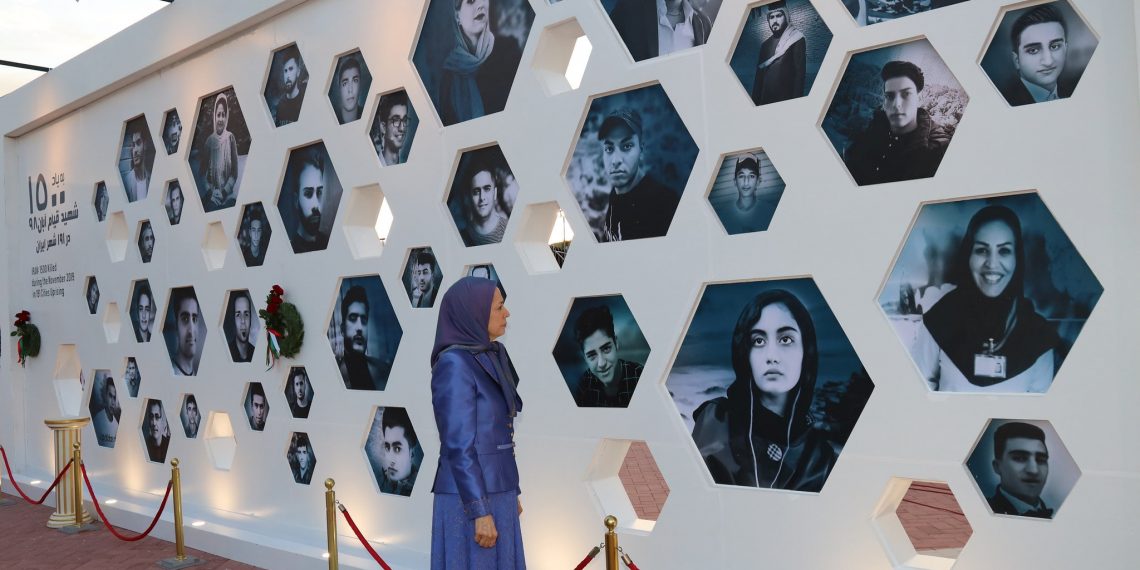 Sunday, July 19, 2020, was Day 2 of the Free Iran Global Summit and the virtual international conference titled, “The 1988 Massacre, A Crime Against Humanity, Remains Unpunished 32 Years After,” held at Ashraf-3, Albania. Prominent lawyers and political personalities, including distinguished female members of European parliaments and former political prisoners and witnesses to the 1988 massacre, addressed the summit.

Two female members of the People’s Mojahedin Organization of Iran (PMOI/MEK), who had been witnesses to the 1988 massacre, were the first speakers at the virtual international conference.

Homa Jaberi, a former political prisoner of the Mullahs’ regime said, “I was in solitary confinement for 2 years in the prisons of Evin and Gohardasht. I also spent time in the Residential Unit, a disgusting compound established by the regime to break the female PMOI-affiliated prisoners in Gezeal Hesar Prison. Women held in this prison for a year or more became mentally unstable due to the inhumane conditions and were not even able to explain what had happened to them. Those who recovered were able to describe how they were forced to get on their hands and knees and make animal sounds while their torturers rode on their backs. Several of the women had been raped.

“We represent the generation that suffered torture and execution by the thousands to achieve freedom. That is why we chose the PMOI, with all our love and faith, taking this path with our eyes wide open. We did this with full knowledge of the risks, and we chose to sacrifice everything to bring freedom and justice to our people.”

“Let me tell you; the change will happen in Iran at the hands of the Mojahedin. We are determined, and we will overthrow this regime and no obstacle will thwart us.”

The next speaker was Damona Taavoni, another witness to the 1988 massacre. In her speech, she said, “My father was executed in the 1988 massacre. My mother was a political activist; I was arrested with her twice, and experienced prison as a child. The second time I went to prison I was only 6 years old. I remember the blindfolded prisoners sitting, their feet bleeding, outside the doors of interrogation rooms. I remember the prisoners’ voices as they screamed and cried out while they were being tortured.

“Now, to Khamenei, Ra’isi, Rouhani, and the rest of those involved in the 1988 massacre and who are still in power, I say, ‘The horrific crimes you are committing every day only add to our determination to overthrow your regime. The day is near when every single one of you will be held accountable.” Mrs. Maryam Rajavi, the President-elect of the National Council of Resistance of Iran (NCRI), attended the ceremony. She visited the photo memorials November 2019 uprising and paid tribute to the 1,500 killed during that time, as well as to the victims of the Coronavirus.

Mrs. Maryam Rajavi began by extending her congratulations “for compelling the clerical regime and its criminal Judiciary to take a step back and suspend the executions of three young protesters in the wake of a storm of outrage and more than 11 million protests. However, the criminal Judiciary of the mullahs sentenced three brave young Kurds in Saqqez to more than 16 years in prison for setting fire to posters of Qassem Soleimani. But, the fury and protests of the Iranian people will continue until the final victory and the overthrow of the clerical regime.

“Moreover, in Behbahan, the regime has resorted to a counter-demonstration, chanting their usual chants of death to the Monafeqin [Mojahedin]. But these theatrics do nothing to resolve the regime’s incurable problems, particularly the value of the country’s currency, which has plunged to 26,000 tomans to the dollar.”

Mrs. Rajavi called the 1988 massacre, “the greatest unpunished crime against humanity. In issuing a fatwa sanctioning the 1988 massacre, Khomeini intended to annihilate the generation of the PMOI/MEK, to guarantee his rule, just as the Mongols did in Iran… For this reason, from the very beginning, when the details of this massacre were revealed, we have been calling for the prosecution of the masterminds and perpetrators of this great crime against humanity.”

Ingrid Betancourt, former Colombian presidential candidate, addressed conference attendees, saying, “The people of Iran are chanting, ‘Down with the Dictator, be it the Shah or the Supreme Leader.’ They are referring to an ongoing alliance. Monarchists and theocrats have been colluding constantly against freedom fighters in Iran. The Iranian people, in the streets of Iran, are telling us that they understand better than anyone how these two forces are working together… Iranians understand that the best way to hold accountable the criminals for 40 years of crime is to overthrow this regime.”

Baroness Betty Boothroyd, former UK Speaker of the House of Commons, also spoke at the summit. She emphasized her continued support for the Iranian Resistance, saying, “What we demonstrate is that not even a pandemic can stop us from standing with the brave people of Iran and support their just demands for change for a free and democratic nation. Nobody symbolizes and represents the Iranian people’s struggle against the regime better than my dear friends and the NCRI, and my special friend, President-elect Maryam Rajavi.

“Her name and her message of freedom makes the regime shake to their very core. This is because of her 10-point Plan, a democratic platform to encompass the aspirations of the Iranian people, it provides a democratic alternative for future Iranian generations and it gives the women of Iran their rights and an opportunity to lead their country and to be part of shaping its future. This is what we aim for.”

Chairwoman of the Foreign Relations Committee of the Federal Belgian Parliament, Els Van Hoof, was another speaker at the summit. She said, “Justice is something you are all striving for in your work. As some of you may know, it is also something I strive for in my parliamentary work. My first thoughts always go out to those who are suffering. To those who are not considered equal, those who are not free, equal opportunities for all, and especially women’s rights are of central importance to me. The systematic violence of these rights by the Iranian regime must be challenged…. Once again, I declare my support for your movement, led by Mrs. Rajavi, and wish you victory in your struggle for human rights and democracy in Iran.”

Wishing success for the Iranian people fighting the regime, Renata Polverini, the Vice-Chairman of the Labor Committee of the Italian Parliament and former President of the Lazio region, said, “When I was first acquainted with you, Camp Liberty was being attacked in what became a humanitarian crisis. I am honored to be present while welcoming some of those who were injured during that attack. As a member of parliament, I will continue to do whatever I can and to not miss a single opportunity to support you.”