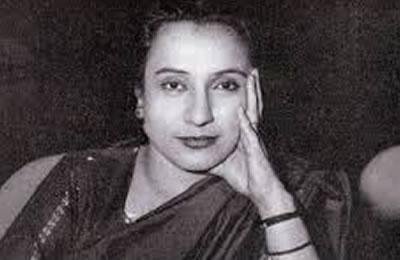 Ikramullah was born as Shaista Akhtar Banu Suhrawardy in Calcutta, British India, as the only daughter of Lt. Col. Dr. Hassan Suhrawardy. She was educated at Loreto House of the University of Calcutta with a BA Hons. After her marriage she left to study at the School of Oriental and African Studies, where she had the honor of being the first Muslim and Asian woman to receive a PhD from the University of London. Her doctorate thesis, “Development of the Urdu Novel and Short Story”, was a critical survey of Urdu literature.

The Suhrawardy family had always been involved in politics. Her cousin Huseyn Shaheed Suhrawardy was the Premier of Bengal, and she had addressed her first public gathering in 1931. During her husband’s posting in Delhi, she came in contact with Muhammad Ali Jinnah and joined the All-India Muslim League. Along with Fatima Jinnah, she set up the Muslim Women Student’s Federation and drew girls into Muslim League activities.

She was one of two female representatives at the first Constituent Assembly of Pakistan in 1947. She was an active defender of fundamental rights in the assembly and conscious of the lack of balance between the two halves of Pakistan. Her first speech was to support a resolution that the Assembly should meet in Dhaka, capital of the more populous East Pakistan, as well as Karachi.

She was Pakistan’s Ambassador to Morocco from 1964 to 1967. She was a delegate to the United Nations on several occasions, and was a member of the committee that worked on the Universal Declaration of Human Rights (1948) and the Convention Against Genocide.

She died in Karachi on December 11, 2000, at the age of 85. The Government of Pakistan posthumously conferred on her its highest civil award, Nishan-i-Imtiaz, in 2002.

Baroness Betty Boothroyd: Iran’s women must shape their own future