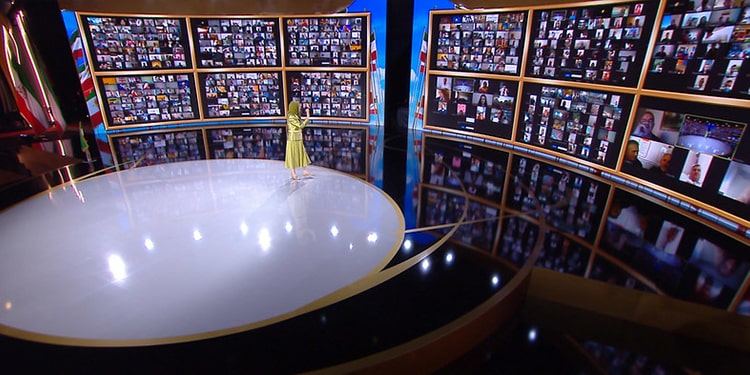 The Day 3 of the Free Iran Global Summit was held on Monday, July 20, 2020 at Ashraf 3.  Thousands of people joined together from around the world for this conference. Hundreds of political dignitaries and lawmakers participated in the conference from various countries. Dozens who addressed the conference included some of the most prominent women of Albania and the United States, who declared support for the Iranian Resistance and the Ten-Point Plan of the NCRI President-elect Maryam Rajavi.

Elona Gjebrea, Secretary of the parliamentary Foreign Affairs Committee and former Deputy Minister of Interior, was among the prominent women who addressed the Free Iran Global Summit on Day 3.

In part of her remarks, Ms. Gjebrea said: “The international community as well as Albania must recognize the right of Iranian people and the resistance to establish freedom and democracy in Iran… I support Madame Rajavi for her Ten-Point Plan for the future of Iran… I am proud to support the Iranian women who are calling for change and democracy. I admire their courage and determination… I stand firm and we stand firm with Madame Rajavi and the people of Ashraf and the resistance units fighting for freedom in Iran.”

Valentina Leskaj, member of Albania’s Socialist Party Leadership, former vice chair of the Council of Europe Assembly, and former deputy speaker of the Albanian Parliament, is among the most prominent women in Albania and in Europe.

In parts of her speech, Ms. Leskaj said “the people of resistance have shown respect for women’s rights and they have shown the example by electing a woman as a leader of the resistance. A woman like Madame Rajavi. A woman leader in front of the mullahs’ regime and this is a very strong message not only for Iran, but for the region and beyond…. Today, women are at the forefront of the protests in Iran and this is a very positive message and a good sign for the future of a free Iran. I support the NCRI and I support Madame Rajavi’s Ten-Point Plan for future of a free, secular and democratic Iran.”

In parts of her speech, she said: “I have read and viewed the dynamic Ten-Point Plan of my sister (Maryam Rajavi) … And I am very glad to be part of the 222 members of Congress, a majority of the House of Representatives, that supports the Iranian opposition and Madame Rajavi for a free Iran…. We are looking for a time when the leadership of Iran will be one that is democratic, secular, and supportive of freedom. We should never stand away from justice, equality, and freedom for everyone. I support your efforts for democracy. Keep moving in that direction so that all Iranians can enjoy freedom and democracy.”

One of the prominent women from Albania who spoke to Day 3 of the conference was Grida Duma, a member of Parliament and the spokesperson for the Democratic Party in the Parliament of Albania. She told the conference: “I have no doubt that soon the day will come when Madame Rajavi would be able to put into effect her Ten-Point Plan for a free Iran. The day will make us feel part of their freedom and we will thank them for giving us the chance to be along with them in the right side of history.”

Albania’s renowned writer and women’s rights activist, Diana Çuli told the gathering about her book, “1,000 stars, the women of the Iranian Resistance.” She said she had interviewed many in order to writer her book, adding, “I met wonderful women all of whom have decided to make this choice in their life that since their youth they began to fight against injustices and decided to continue till the end, to work for the freedom of their country to liberate it from dictatorship… When I asked them what made them to take this decision to sacrifice their personal life, they answered, love, love for our country, because we wanted to be free, we want for our people to be (free).”

Emiriana Sako, the mayor of Durres, one of the cities of Albania. Declaring support for the Free Iran Global Summit, Ms. Sako said Ashraf 3 had a positive role in the economy of Manz and they also provided great help during the earthquake last year. She extended her wishes for a speedy return of the Iranian Resistance to their country.

One of the prominent women of Albania who addressed Day 3 of the conference was Orjola Pampuri, Member of Parliament. In part of her remarks, she said: “We know that your women are doubly oppressed. We know that your children are suffering… Some of them have no food, have no possibility to study, and they survive working on the streets. Your beautiful country is suffering for freedom, is suffering for a good living. You need someone that works and thinks for you and your welfare, and no one else is doing better than Madame Rajavi.”

Drita Avdyli, Chair of the National Chamber of Mediation in Albania, told the conference: “In July, the Iranian regime executed a man in Iran just for drinking alcohol… Two months ago, the regime arrested eight university students for supporting the PMOI/MEK opposition movement. They want to execute these students. This is also to scare the students in Iran…. All these cruelties will not work and will not silence people’s quest for freedom in Iran. We know that if you are together and with a leader like yours, you will win (the fight) for a free Iran, for a democratic system.”

Sevim Arbana, activist of the democratic movement in Albania and founder of Useful to Albanian Women Association, said in her speech: “As a women’s rights defender in Albania, I learned of a horrible incident which had happened in Iran. And that was the murder of Romina Ashrafi by her father. The mullahs called this an honor killing, but it was not so. The court sent Romina to her death. The tearful girl told the judge that her father would kill her, if she goes back home. The Iranian Judiciary does not consider this a crime. Opposition to the mullahs is a crime. Iranian media reported that Romina was crying but no one showed any reaction. Unfortunately, the UN did not react. Instead, they say that the sanctions against the Iranian regime must be lifted. We, particularly human rights defenders, must not remain silent. I have been supporting the Iranian Resistance for years. Mrs. Maryam Rajavi’s Ten-Point Plan is a strong plan for the future of the people of Iran.”

Fatbarda Kadiu, Member of Parliament and one of the prominent women of Albania, told the conference: “I’m very happy that the situation of the coronavirus did not prevent this event, especially at the time when the Iranian resistance is closer to its final victory than ever. Iran is a great nation with a great civilization of the old Persia which has really contributed very much to the civilization of the world. Unfortunately, it has been taken hostage by dictatorial regimes… We should stand with the Iranian resistance, and with Iranian citizens for them to establish a new government, to make changes, and to establish a democracy in their own country.”

Margarita Kola, a lawyer from Albania, expressed support for Maryam Rajavi and the Iranian Resistance by saying, “We as Albanians are very proud to be on the right side of the history in this moment. Let my words join the wishes for peace and freedom in Iran… I am here today to encourage Mrs. Rajavi’s efforts for freedom and democratic change in Iran.”