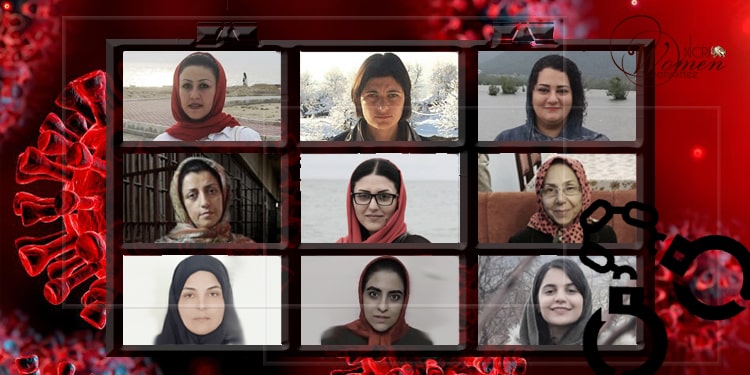 Following the emergence of the role of women in all aspects of the 2019–2020 Iranian uprisings, the clerical regime has once again targeted resistant political prisoners, fabricating baseless cases against them to keep them behind bars. Meanwhile, the Covid-19 crisis has created an opportunity for the regime to physically eliminate their opponents. Using the pretext of Coronavirus casualties around the world, especially in Iran, the regime seeks to quietly eliminate its opponents and avoid international condemnation.

Amid the Coronavirus crisis, the most resistant political prisoners and distinguished activists are experiencing new cases filed against them, as well as new sentences and other forms of repression and harassment.

Officers from the Prosecutor’s office entered Fatemeh Mossanna’s house without notice. They handcuffed her and transported her to Evin Prison to complete her sentence. The officers performed this brutal act on May 6, 2020, in front of Ms. Mossanna’s daughter and son. Ms. Mossanna had been released on bail from Evin Prison on March 31, 2020.

Political prisoner Maryam Akbari Monfared was orally summoned to the Evin Courthouse on June 10, 2020. The new charges leveled against Maryam Akbari included chanting slogans on the night of February 11, 2020, the anniversary of the 1979 Iranian Revolution which toppled the Shah. Maryam Monfared is serving her 11th year in Evin Prison without even a day off.

Resistant political prisoner Atena Daemi, was due to be released on July 4, 2020, having already served 5 years. However, she was sentenced to 5 years and 74 lashes.

While Atena Daemi was serving her sentence in prison, the Intelligence Department of the Islamic Revolutionary Guard Corps (IRGC) filed two new cases against her.

Farangis Mazloumi, mother of a political prisoner who was personally detained for some time last year, was sentenced to 6 years in prison on charges of having contact with the opposition People’s Mojahedin Organization of Iran (PMOI/MEK) and disseminating propaganda against the state in favor of opposition groups.

Golrokh Ebrahimi Iraee was re-sentenced after being released from prison – this time to 3 years and 7 months. She has been detained in Qarchak Prison since November 9, 2019, and has been denied leave.

Political prisoner Narges Mohammadi was sent to exile in Zanjan Prison for staging a sit-in protest in Evin Prison, in solidarity with families of the victims killed in the November 2019 uprising.

Ms. Mohammadi has been deprived of her basic rights since being relocated to Zanjan Prison on December 25, 2019. Human rights activist Narges Mohammadi announced that she had been physically attacked and insulted by Gholamreza Ziaii, Evin Prison’s warden.

Intelligence agents moved Zeinab Jalalian out of Khoy Prison on April 29, 2020, before relocating her to Qarchak Prison after 2 days. Zeinab Jalalian went on a hunger strike on June 20, demanding that she be returned to Khoy Prison or moved to Evin Prison, after being infected with the Coronavirus. However, intelligence agents transferred her to an unknown location on the 6th day of her hunger strike. According to the evidence presented by the Jalalian family, Zeinab has likely been transferred to Kerman Prison.

Former political prisoners Sedigheh Moradi and Zahra Akbari-nejad Dorcheh were also each sentenced to 95 days in prison. Their sentences were announced by the Evin Courthouse in early July 2020.

Arrests and repressive measures against other women activists

Among other political prisoners, Parasto Moeini and Forough Taghipour were arrested on February 24, 2020, on charges of supporting the PMOI/MEK. They were transferred to the detention center at the Ministry of Intelligence.

In the third week of April 2020, the two prisoners were transferred from Evin Prison to Qarchak Prison. During their 5-month incarceration, they were under intense pressure by interrogators for a television interview.

Sakineh Parvaneh, a Kurdish political prisoner imprisoned in Qarchak Prison in Varamin, was sentenced to 5 years in prison and was banned for 2 years from membership in political groups. She was arrested on February 7, 2020, and transferred to Evin Detention Center. The political prisoner has been beaten repeatedly since her arrest and has been taken to a psychiatric hospital several times.

Ashraf (Roghiyeh) Nafari, a mathematics student at Khajeh Nasir Tusi University and a Twitter activist, was arrested on April 26, 2020, in Shahriar. She was then transferred to Qarchak Prison in Varamin.

The Sanandaj court also sentenced Zahra Mohammadi to 10 years in prison. She had been arrested in May 2019 and temporarily released after 7 months in prison.

Arrests and harsh sentences come at a time when prison health conditions are reported to be extremely poor and the virus has spread uncontrollably in most prisons.

By the first week of May 2020, more than 50 women prisoners had been infected with the Coronavirus in Sepidar Prison. These prisoners reportedly have no access to medical care. Prison authorities do not even deliver the medicines brought to prisoners by their families. The quarantine ward is separated from other wards by only a few bars.

According to the numerous reports received from Qarchak Prison in Varamin, at least 130 prisoners are infected with the Coronavirus.

Female prisoners infected with the Coronavirus are held in a place called Prison Club, which is an unsanitary environment that lacks proper ventilation. Prisoners are deprived of all medical care.

On July 7, 2020, prison officials issued an order to cut off communication between prisoners held in quarantine in Ward 5 and other prisoners. But these prisoners go to the common corridor or the prison kitchen without any restrictions.

On July 11, 2020, political prisoner Narges Mohammadi reported on the dire conditions in Zanjan Prison. She said that 12 of the 18 women prisoners in the prison were infected with the virus. “Twelve of us have been bedridden with symptoms of extreme fatigue, abdominal pain, diarrhea and vomiting, and the loss of the sense of smell. We have no medication and lack proper treatment or nutrition,” she wrote.

“The lack of medical treatment, inadequate space to quarantine patients, uncontrolled admission of new prisoners without examining their health conditions, have all led to the spread of the Coronavirus in prison,” she added.

As a result of the regime’s inhumane policies, a number of resistant political prisoners have been infected with Covid-19.

One of the political prisoners is Nejat Anvar Hamidi, 62, who has been infected with the virus in Sepidar Prison in Ahvaz since the last week of April 2020. She has not received any medical treatment since contracting the virus and being transferred to prison quarantine. Hamidi was not even given the necessary medication that her family delivered to the prison. This imprisoned woman’s life is in danger due to her advanced age and pre-existing medical conditions.

Political prisoner Zeinab Jalalian was infected with the Coronavirus in Qarchak Prison in Varamin. Her illness was confirmed on June 8, 2020, when she was taken to a hospital outside the prison under strict security measures. According to the CT scans, her lung tissue was damaged due to the Coronavirus and blood clots formed in her lungs. She had previously struggled with asthma.

Political prisoner Narges Mohammadi has also been suffering from worrying symptoms of Covid-19 since the first week of July 2020. She has already suffered from a number of physical problems, most notably pulmonary embolism.

Forough Taghipour, who is being held in Qarchak Prison in Varamin, has also contracted the virus.

The clerical regime’s deliberate and criminal intent to end the lives of resistant political prisoners is evidenced by the lack of medical care for sick political prisoners – who were already struggling with serious illnesses – and the judiciary’s refusal to release them, even temporarily.