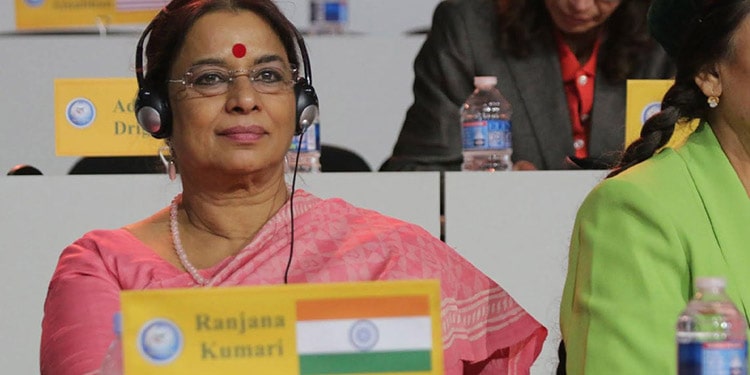 Dr. Ranjana Kumari, Director of Centre for Social Research (India), and one of the 100 most influential people in gender policy for 2019

Nothing, nothing will stop us from joining together! Not even the pandemic.

The people of Iran started a series of protests last year that turned a page in your country’s history. The pivotal role of Iranian women was very telling. Their courage was a source of inspiration for women all over the world.
In fact, according to the reports, 1,500 were killed and out of which, 400 were women. That speaks volumes about the courageous women of Iran who are fearing none to fight for their rights under the leadership of Mrs. Rajavi.

In fact, the story of 40 years of your struggle and especially this reminds us of 30,000 massacred in 1988 and this is the 32nd anniversary of all those terror, suppression by the Iranian regime of mullahs that the whole of the country and its people are suffering.

But, I know that women, the symbol of courage of Iran, Mrs. Rajavi, will not relent. She will not leave any stone unturned in her fight for democracy, peace and justice for the people of Iran.

She has been fighting to eradicate the misogynist mullahs and your victory will not only bring change to Iran, but will bring world peace and will affect democracies around the world.

So, allow me to join my sisters in the resistance inside Iran and tell you that, you shall win!

I know that whatever may be the regime, how so-ever undemocratic it may be, people’s voices cannot be silenced.

There is no way that women under the leadership of Mrs. Rajavi be silent, keep quiet. This struggle is going to go on until victory is achieved.