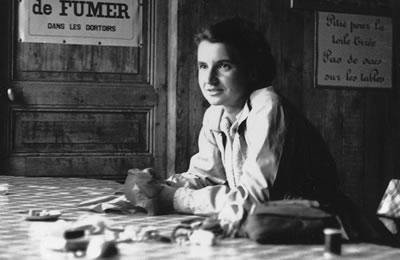 Rosalind Elsie Franklin (25 July 1920 – 16 April 1958) was an English chemist and X-ray crystallographer who made contributions to the understanding of the molecular structures of DNA (deoxyribonucleic acid), RNA (ribonucleic acid), viruses, coal, and graphite. Although her works on coal and viruses were appreciated in her lifetime, her contributions to the discovery of the structure of DNA were largely recognized posthumously.

Born to a prominent British Jewish family,Franklin was educated at a private day school at Norland Place in West London. Then she studied the Natural Sciences Tripos at Newnham College, Cambridge, from which she graduated in 1941.

Fortunately, the British Coal Utilisation Research Association (BCURA) offered her a research position in 1942, and started her work on coals. This helped her earn a Ph.D. in 1945. She went to Paris in 1947 as a chercheur (post-doctoral researcher).

She became a research associate at King’s College London in 1951 and worked on X-ray diffraction studies, which would eventually facilitate the double helix theory of the DNA. She died in 1958 at the age of 37 of ovarian cancer.