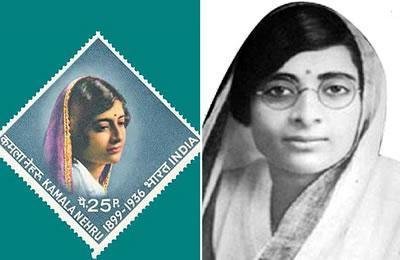 Kamala Kaul Nehru (1 August 1899 – 28 February 1936) was a freedom fighter, wife of Jawaharlal Nehru (leader of the Indian National Congress and the Prime Minister of India), and the mother of Indira Gandhi, also another Prime Minister. Her grandson Rajiv Gandhi too was a Prime Minister of India for a term of 5 years. She was known to be deeply sincere, highly patriotic, a women’s rights activist, serious minded and sensitive.

Kamala married Jawaharlal Nehru at the age of 17. Her husband went to a trip in the Himalayas shortly after their marriage. Kamala gave birth to a girl child in November 1917, Indira, who later succeeded her father as prime minister and head of the Congress party.

In the Non Cooperation movement of 1921, she organized groups of women in Allahabad and picketed shops selling foreign cloth and liquor. When her husband was arrested to prevent him delivering a “seditious” public speech, she went in his place to read it out.

Kamala died from tuberculosis in Lausanne, Switzerland on 28 February 1936, with her husband, daughter and mother-in-law by her side.