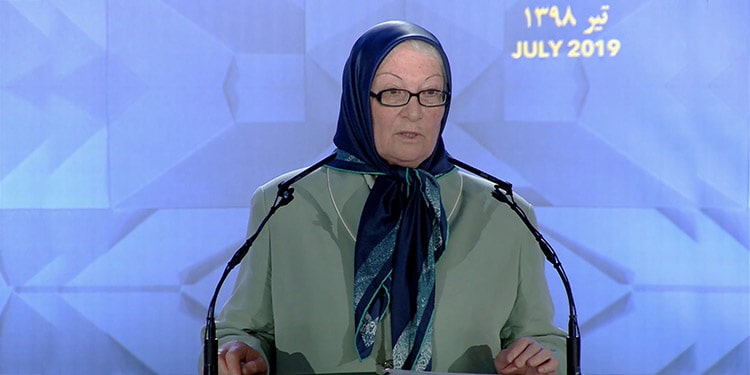 Speech by Fereshteh Akhlaghi, one of the officials of the PMOI Research Unit on Martyrs of the Iranian Resistance, to the Call-for-Justice Conference at Ashraf 3

My name is Fereshteh Akhlaghi. I have been working in the PMOI Research Unit on Martyrs of the Iranian Resistance for over 27 years.

Most of you have visited the Exhibition held at Ashraf 3 and expressed the overpowering impact it had on you. What I would like to say is that this exhibition is only a drop from an ocean, particularly that it was set up within a short period with the efforts of my brothers and sisters.

And now I would like to enumerate a few examples of the atrocities taken place in prisons in Iran.

Within just two years, 477 youths under the age of 18 were executed, including two 11-year-olds and three 12-year-olds. Two of them were identified as Seyed Mehdi Tabatabaii from Tehran and Mehrdad Fadayee-nia from Masjed Solaiman.

Nineteen 14-year-old teenagers are among those executed, including Ramezan-Ali Burkhaili from Qa’emshahr, Nasser Behrazi from Mashhad, Vahid Rajabi from Tehran, Massoud Rabii from Isfahan, and Fatemeh Safaiyan from Shiraz.

There were 32 executions of 15, 16 and 17 year olds. Maryam Gholizadeh from Tabriz and Hamed Kazemi Bahri from Langrood were 15 years old.

Also during this time, 53 pregnant women from among members of the Mojahedin (PMOI/MEK) were executed.

Leila Abu Ahrar Shirazi, 22, was a psychology student at Shiraz University. Assadollah Lajevardi[1] summoned Leila five days after the execution of her husband, Mohammad Hadi Alami. He told her, “We have executed your husband. Now for you to save yourself, you go to the recording room and give an interview so we can consider mitigating your sentence.” But Leila angrily shouted out, “Never!” And spat on his face.

Sorayya Abolfat’hi, a 20-year-old student from the University of Tabriz, upon return from her court hearing, told her inmates, “When the executioner Mousavi Tabrizi insulted Massoud Rajavi, I slapped him in the face so hard that I think I set a record and they will surely execute me tonight.”

Mokaram Poor-Reza was a teacher with a BA from Roudsar. After the execution of her husband, Mehdi Zabihian, she was executed by the firign squads while she was seven months pregnant.

Tahereh (Zainab) Habibi Fard, 20, was arrested along with her husband, Javad Shahin. In two weeks, the couple had been tortured so much that they could not recognize each other when they were confronted.

Taherah was executed in Shiraz while she was six months pregnant and her tortured body was abandoned in front of their home. Taherah’s mother suffered a stroke upon seeing her daughter’s corpse, and she died along with her daughter.

Massoumeh Azdanlu, 23, was an engineering student at the University of Science and Technology. She was subjected to brutal torture after her arrest and was executed while pregnant.

Executed mothers over 50 years of age

A number of PMOI women, mostly over the age of 50, were also among those executed by the mullahs’ regime.

Fakhri Haj Daei was the mother of Mohammad Hassan and Mohammad Jafar Mannani, and the grandmother of Rahman Manani (who was killed in the 2013 massacre in Ashraf, Iraq). She was martyred in Tehran under torture in September 1982.

Malek Taj Hakimi or mother Sharifian, 55, had three children. The mother’s fingers were cut off under brutal torture and she lost her sight and hearing. It is noteworthy that her son Hossein Sharifian was executed before her.

Effat os-Sadat Khalifeh Soltani or mother Shafaii from Isfahan, was the wife of martyred Mojahed, Dr. Morteza Shafaii, and the mother of martyred Mojahedin Javad, Maryam and Majid Shafaii. Before her execution she had said, “I am proud to give my entire being for this path.”

Shoghra Davari, or mother Shayesteh, had eight children. Her daughter, Fatemeh Shayesteh, was executed before her and her bloody clothes were thrown into her cell in prison, but her faith did not weaken. Mother Shayesteh was hanged in the courtyard of Mashhad Prison with her son and 17 others.

Massoumeh Shadmani or mother Kabiri, 50, was a political prisoner during the Shah’s dictatorship. With her very strong and resistant spirit, she had infuriated and weakened the regime’s forces. Mother Kabiri was killed under torture in January 1982.

I am certain that there will no longer be a trace of execution and torture in the free Iran of tomorrow.

Thank you for the opportunity you gave me.

[1] Assadollah Lajevardi was notorious as the “butcher of Evin.” He invented many vicious torture methods and personally raped female political prisoners. He was also among the perpetrators of the 1988 massacre in Iran.