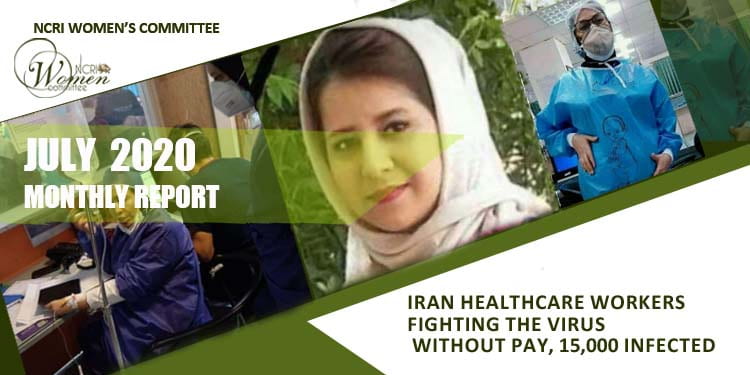 The number of people dying of the coronavirus has exceeded 82,000 in Iran, as the Iranian Resistance’s sources inside Iran say.

“Only five provinces are not in the red zone,” said Iraj Harirchi, deputy Minister of Health, adding, “This means that 70.5 million out of the total population of 82 to 83 million people are living in red provinces.” (The state-run ILNA news agency – July 28, 2020)

Harirchi also acknowledged that the situation in Tehran is not well, describing the capital as “the epicenter of the coronavirus in the whole country.” (The state-run ISNA news agency – July 26, 2020)

“The number of daily deaths would reach 1,600, if the outbreak is not curbed,” warned the Assembly of Medical Groups Associations in a letter to mullahs’ president, Hassan Rouhani. “This would be a national catastrophe,” the letter said.

In such circumstances, the ruling mullahs have refused to allocate the budget needed to fight the Covid-19. They have not even paid the salaries and wages of the medical staff and nurses.

The clerical regime’s officials admit that “nurses are falling like autumn leaves” and that at least 15,000 of the medical staff have contracted the disease. The president of one of Tehran hospitals said, “We were caught by a surprise attack of the disease in July.” (The state television, June 29, 2020)

Nurses say, “We are being annihilated!”

The greatest problem of Iran medical staff is shortage of workforce. This is why they have to work several consecutive shifts.

The shortage of workforce is such that in public hospitals, many of the duties which need to be done by nurses and healthcare workers, are given to the patients’ companies. (The state-run Aftab Yazd newspaper – July 27, 2020)

One of the nurses said, “We are being annihilated!”

Another nurse said, “Because there are not enough replacements, the pressure is brought on others. Nurses become exhausted after some time, and many of them end up suffering from mental problems such as depression.”

Mohammad Reza Mirzabeigi, President of the National Nursing Organization, declared, “Some 60 to 70 percent of these nurses have not seen their families for a long time.” (The Young Journalists Club – July 15, 2020)

Iran medical staff are working 392 hours per month to provide health services. This must be compared to the international standard of 175 hours per week.

Iraj Harirchi said in this regard, “In my visit to Boukan (Iranian Kurdistan), I saw that nurses are working 230 hours per month in this crisis, in harsh circumstances and with those protective suits that healthcare workers wear.”

While the medical staff and nurses suffer from shortage of workforce and excessive work pressure, Mohammad Sharifi Moghaddam, director general of the House of Nurses in Iran, on June 27, 2020 announced: “Presently, there are some 50,000 nurses across the country who do not have jobs.”

Mohammad Mirzabeigi, President of the National Nursing Organization, had earlier admitted: “We must have hired 9,000 nurses every year. Unfortunately, however, we have hired only 3,000 so far on temporary 89-day contracts.”

Iran among states with high number of healthcare workers’ death

Thousands of the medical staff in Iran have been infected with the virus, hundreds of them losing their lives. The clerical regime is not transparent in this regard and does not present accurate data on the deaths and infection of the medical staff.

Mohammad Sharifi Moghaddam, director general of the House of Nurses in Iran, had previously told the state-run Ressalat daily that these figures are “of absolute security concern.”

According to a report by Amnesty International, Iran ranks eighth among the countries with the highest known health worker deaths. AI estimated the figure to be 91 in Iran but indicated that the figure is “likely to be a significant underestimate due to under-reporting.”

Earlier, on April 28, 2020, Nassrollah Fat’hian, coordination manager of the National Coronavirus Combat Taskforce, had declared that more than 100 of the medical staff and nurses had lost their lives in dealing with the coronavirus.

On the infection of the medical staff and healthcare workers, Iraj Harirchi, deputy Minister of Health, said on the state TV: “We have nurses who have not seen their children for several months. We have physicians who are working in (other) cities and have not seen their wives. 9,959 of them have definitely tested positive, another 5,125 are suspected of infection and have symptoms… Whether they are physicians or nurses, for whatever reason, they have contracted the coronavirus and have died. Nurses are falling like autumn leaves.” (The state Television – June 29, 2020)

In the most recent case, Kiana Nakhaii, 26 and pregnant, lost her life to the coronavirus. This nurse was working in the emergency room of a hospital in the city of Jiroft in Kerman Province (southern Iran). She had a C-section ten days earlier to give birth to her baby but could not hold her baby in her arms before her death.

The following table compiles the data mentioned by various regime officials on the infection of Iran medical staff and nurses:

Iran medical staff protest regime for not paying their salaries

Since the beginning of the Covid-19 outbreak, Iran medical staff and nurses have been at the forefront of the fight against the virus. Despite the pressure and the long working hours, however, the Iranian regime has refused to pay the salaries of nurses and all healthcare workers.

The salary of Iranian nurses, 80% of whom are women, are the lowest of all government employees. Nevertheless, many of these nurses have been hired on a temporary basis and on 89-day contracts, without insurance or benefits.

A record of protests in various cities and provinces by the medical staff and nurses appears below:

Nurses working in the Medical Sciences University Compound of Mashhad held a gathering in protest of the regime’s failure to attend to their economic problems on July 1, 2020. But they were met with the State Security forces’ attack. The SSF used batons and electric shockers to disperse the nurses. On the same day, the state-run ILNA news agency reported that ten nurses had been arrested during this protest.

In winter 2020, the Minister of Health promised to pay the nurses’ salaries. The state television, however, reports that many of these nurses have not received their wages and salaries since March 2020. According to this report, from a total of 700 billion tomans allocated to pay the salaries of nurses, only 200 million tomans has been actually paid.

And Iran medical staff and nurses continue to fight on two fronts. On the one side is the threat of getting infected with the coronavirus, and on the other, their economic problems and being deprived of the most basic living necessities. In the meantime, the clerical regime has abandoned them defenseless without any form of support.