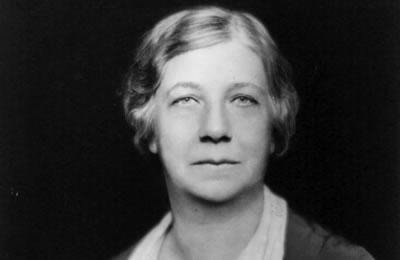 Mary Ritter Beard (August 5, 1876 – August 14, 1958) was an American historian and archivist, who played an important role in the women’s suffrage movement and was a lifelong advocate of social justice through educational and activist roles in both the labor and woman’s rights movements.

She wrote several books on women’s role in history including On Understanding Women (1931), America Through Women’s Eyes (1933) and Woman as Force In History: A Study in Traditions and Realities (1946). In addition, she collaborated with her husband, eminent historian Charles Austin Beard on several distinguished works, most notably The Rise of American Civilization (1927).

She, along with her husband, whose pacifist stance proved controversial in the last decade of his life, destroyed nearly all of their papers and manuscripts before their deaths. They also requested of their children in their will that they not publish any of their letters.

She was interred next to her husband Charles, who had died a decade earlier, in Ferncliff Cemetery, Hartsdale in Westchester County, New York.

She taught in Oswego, Kansas; the Indian Territory; and Des Moines, Iowa. She married in 1907 and earned a Bachelor of Arts degree from Des Moines College in 1914, then earned a law degree through distance learning facility La Salle Extension University. She remained the only African American female lawyer in Iowa until 1950.

She took over her husband’s law practice after his death. In 1921 she was elected president of the Colored Bar Association. In 1925 Rush and four other black lawyers founded the Negro Bar Association after being denied admission to the American Bar Association.

Rush was also an activist in the civil rights and suffrage movements, as well as an author and playwright.