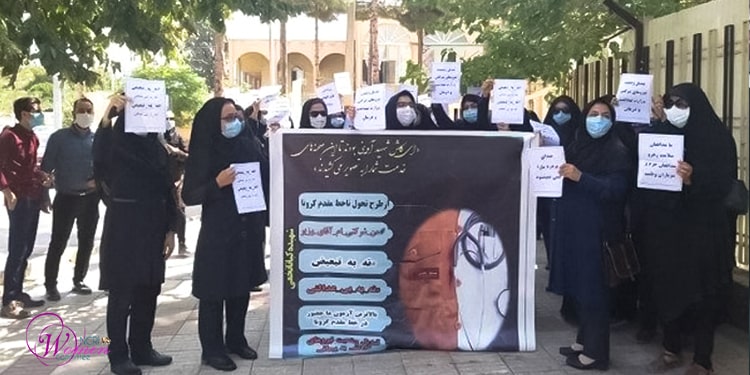 In step with the nationwide strikes of Iran’s oil worker, women and other sectors of Iranian society have also held protests across the country. Iran nurses, teachers, workers, and defrauded clients of corrupt financial institutes held protest gatherings and strikes in recent days in Tehran, Mashhad, Rasht, Urmia, Ahvaz, Shush, Yazd, and Khomein among others.

The protests by Iran nurses, teachers, and workers in various parts of the country is because they have lost their jobs during the coronavirus pandemic.

The protests reported here are those in which women widely participated.

Nurses and healthcare workers hired by private companies staged a chain of protests in at least seven provinces on August 10, 2020.

They held protests outside the governor buildings in the provinces of Yazd, Khuzestan, Kerman, Lorestan, Razavi Khorasan, West Azerbaijan, and the Central Province.

The protesting nurses and healthcare workers called for interference of the Health Ministry to hire them directly and remove the private companies.

The salary of the nurses and healthcare workers hired by these companies is around 2 to 3 million tomans while the salaries of those who are hired officially or by contracts are around 5 to 7 million tomans.

The protesters said the nurses and healthcare workers hired by companies are deprived of the privileges entrenched in chapter 10 of the National Services Management Law as well as of the special bonuses. (The state-run ILNA news agency – August 10, 2020)

On August 9, 2020, a group of teachers and educators of the Literacy Movement held a protest gathering outside the mullahs’ parliament in Tehran.

These educators were supposed to be officially hired by the Education Ministry after two years. They say they have been discriminated against and are now being required to take an exam to be eligible for official employment.

Also in Yazd, a group of teachers held a protest outside the Governor’s building in this city.

The wrong policies of the clerical regime and their failure to officially employ teachers with long experiences in this field have badly impacted the lives of this sector, half of whom are women.

In a tragic example in the city of Kazerun, Fars Province, Ms. Tayyebeh Sharifi, a teacher who had four children, took her own life because she could not pass the exam.

6,000 educators of the Literacy Movement were not able to pass the exam. Many of them are aging and will not have any future opportunity to be employed.

On August 11, 2020, female workers and families of workers of the Sugarcane Company of Haft Tappeh joined the workers’ strikes on its 58th day and marched in the streets of the city of Shush, in Khuzestan Province.

On August 13, 2020, the residents of the villages of Khomein held a protest outside the governorate in this city in the Central Province. They demand to receive their share of water.

On August 9, 2020, defrauded landowners held a protest outside the West Azerbaijan Governorate in Urmia. They have bought lands which have not been handed over to them. None of the government officials have so far answered their complaints.

Defrauded clients of Adineh Commercial Complex held protest gatherings from August 2 to 6, 2020, outside the administration building of this institute in Rasht, capital of Gilan Province, in northern Iran. They have paid in advance to buy commercial units, but the company does not hand them the units they have bought. Finally, on August 6, the protesters received their response when the State Security Force attacked their gathering and brutalized the protesters.