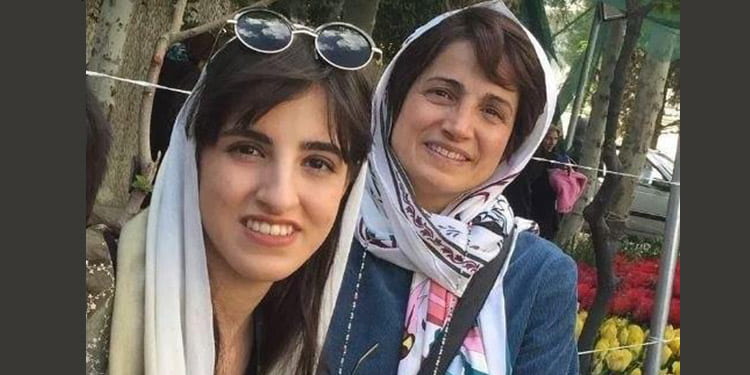 Mehraveh Khandan was arrested and temporarily released on bail after a few hours. It is said that her arrest was to bring further pressure on her mother, human rights lawyer Nasrin Sotoudeh who is on hunger strike in Evin Prison.

At 11 a.m. Monday morning, August 17, 2020, five Judiciary agents went to the residence of Ms. Nasrin Sotoudeh and abducted her daughter, Mehraveh Khandan, without presenting any explanations. They took her to the Security Courthouse of Evin.

Mehraveh Khandan is only 20 years old. She has already been deprived of leaving the country since she was 12.

In September 2018, Evin Prison authorities harassed and threatened to deprive her from visiting her mother under the pretext of mal-veiling when she had gone to visit her mother.

Over the past years, Ms. Sotoudeh’s family have been under various forms of pressure.

Nasrin Sotoudeh’s husband, Reza Khandan, was also arrested in September 2018 and remained in jail for several months. Ms. Sotoudeh went on hunger strike on August 25, 2018, and on September 6, announced that she would refuse to accept any IV fluids, or her blood pressure taken at the prison’s medical clinic.

She also went on hunger strike to protest the pressures and threats levels on her children.

Human rights lawyer Nasrin Sotoudeh has been on unlimited hunger strike since August 11, 2020, in protest to the failure of prison authorities to respond to the political prisoners’ demand as well as their failure to address prison conditions during the coronavirus outbreak. By her hunger strike, she is demanding the release of all political prisoners.

Human rights lawyer Nasrin Sotoudeh was arrested on June 13, 2018 and detained since in the women’s ward of Evin Prison. Her charges include “collusion against national security”, “dissemination of falsities”, “distortion of public opinion” and “insulting the state officials.” She has been sentenced to a total of 38 years in prison and 148 lashes.