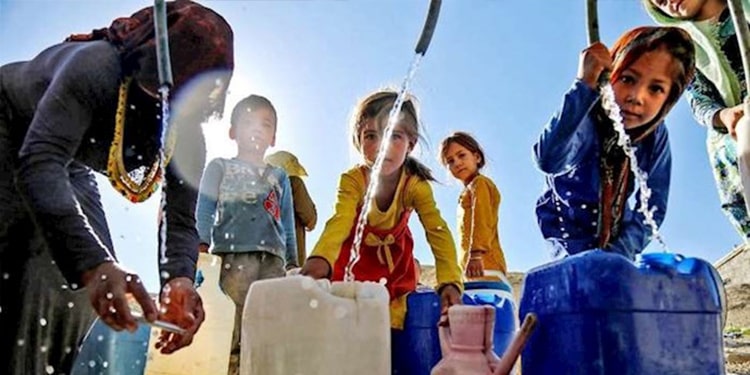 Drought in Khuzestan has become an acute problem for this region’s people, leading to repeated protests by local residents. Women and children suffer from multiple health problems, which have multiplied during the Covid-19 crisis.

Khuzestan, a thirsty province sitting on the water

Located in southwest Iran, on the shores of the Persian Gulf, Khuzestan has five large rivers and seven water dams. However, the people of this oil-rich province continue to suffer from extreme drought.

According to state-run media, at least 500 villages in Khuzestan have neither a stable water supply nor a potable water system. The problem of water shortage in Khuzestan is not limited to villages. In recent years, people in major cities of this province, including Ahvaz, Abadan, and Khorramshahr, have protested the terrible quality of drinking water.

For example, areas in Ahvaz, the capital of Khuzestan province, suffer from acute water problems.

The fragility of the water supply pipes causes frequent water cuts in the areas of Kut Abdullah, Khashayar, Siyahi, Ein Do, and Pardis.

On Friday, June 26, 2020, residents of Am Altamir village in Ahvaz blocked the old Ahvaz-Khorramshahr road in protest to the frequent and prolonged water cuts.

Residents of Khorramshahr have repeatedly protested in front of the local water department and the municipality due to the salinity of the available drinking water.

Residents of Abadan have repeatedly protested the bad taste and unhealthy drinking water in this city.

Some villages in Shush City are deprived of drinking water.

Village residents dig wells next to their homes to have access to water; however, due to the lack of water in the area and elevated temperatures, the drilled wells soon dry up.

Villagers are forced to buy the drinking water they need from Shush County, and besides paying for the water, they must pay large sums to have the water delivered to their villages.

Sadegh Haghighipour, Managing Director of Khuzestan Water and Sewerage, said, “About 700 villages in Khuzestan province have problems with water supply and distribution. We have stated this many times, but the government does not pay attention.” (The official IRNA news agency – June 13, 2020)

Mojtaba Yousefi, member of the mullahs’ parliament from Ahvaz, has recently admitted that the residents of 800 villages in Khuzestan do not have access to sustainable potable water, despite their proximity to 5 major dams and 7 rivers. (The state-run Fars news agency – August 10, 2020)

In many areas of Khuzestan province, especially in urban and rural suburbs, pipes sink into the sewer system. The piped water is a combination of water and sewage.

Women, Coronavirus, and drought in Khuzestan

Women and children are the main victims of the Khuzestan drought, and the Corona crisis has exacerbated their problems.

Women’s health is society’s health, but in the absence of clean drinking water and with the frequent water cuts, women in Khuzestan face many problems, both in terms of personal health and caring for their children. They say they have neither drinking water nor water for bathing and washing clothes.

In the absence of proper plumbing, women in Khuzestan are forced to carry the water they need. This results in many physical problems.

Women must wait in long lines – sometimes for hours – just to get a bucket of drinking water for their families.

Amid the Covid-19 pandemic, Khuzestan is a “red” province in the country. Women and other residents face even more problems given that a primary safety measure against contracting the virus is frequent hand- washing with soap and water.

In addition, the bad water poses a risk to health and weakens the immune system, making the people of this province more susceptible to the Coronavirus.

Gheyzaniyeh Rural District, the tip of the iceberg

The drought in Khuzestan became public on May 23, 2020, when residents of Gheyzaniyeh led a strong protest.

“People do not have water to drink, let alone water for health purposes,” said Mohammad Bavi, a member of the Gheizaniyeh district council (The state-run ILNA news agency – May 26, 2020).

An area resident said, “When a person is suffocating, he has to paddle. We had to close the Ahwaz road for a few minutes so that our voices could reach the authorities. But the special unit answered the thirsty people with bullets” (The state-run Science and Technology website – May 29, 2020).

A number of protesters, including a child, were shot and wounded during the state crackdown on the protest.

Gheizaniyeh’s population consists of more than 26,000, mainly farmers and ranchers. It is located 40 kilometers east of Ahvaz on the route of Mahshahr, Ramshir, and Ramhormoz.

Despite 600 oil wells and daily production of more than 500,000 barrels of oil, Ghazanieh is one of the most deprived parts of the province. This area hosts oil and gas companies and boasts the country’s largest oil fields (The state-run Donyay-e Eghtesad website – May 28, 2020).

Gheizaniyeh residents have been facing water shortages since 2004. Locals are deprived of drinking water for days, sometimes even months (The state-run Mashreqnews.ir – May 25, 2020).

Most residents work in the animal husbandry and agriculture sectors but have lost their jobs. In the summer heat, Gheizaniyeh residents must meet their daily needs with nothing more than the water rations provided in barrels (The state-run ILNA news agency – May 26, 2020).

Where does Khuzestan’s water budget go?

The mullahs’ regime has made many empty promises but otherwise taken no action to solve the water shortage problem in Khuzestan. On the contrary, the Islamic Revolutionary Guard Corps (IRGC) has diverted rivers and caused droughts in Khuzestan by haphazardly constructing several poorly engineered dams.

The IRGC has also sold and exported Iranian water to neighboring countries, including Iraq.

Given the mullahs’ corrupt regime, it is not clear where the funds allocated to solve the water and sewage problem in Khuzestan are spent.

According to the state-run Aftabnews.ir, July 12, 2020, “Despite the World Bank loan, which is still unclear, and the reallocation of funds from the National Development Fund and other budget items, the water and sewage problems of Khuzestan province persist.”