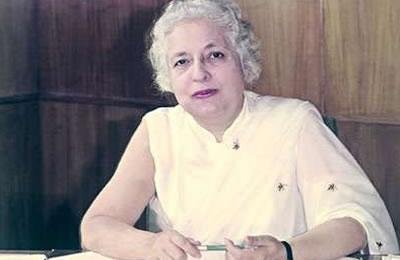 Vijaya Lakshmi Pandit (18 August 1900- 1 December 1990) was an Indian diplomat and politician, the sister of Jawaharlal Nehru the aunt of Indira Gandhi and the grand-aunt of Rajiv Gandhi, each of whom served as Prime Minister of India. She was the first Indian woman to hold a cabinet post in pre-independent India.

In 1937, she was elected to the provincial legislature of the United Provinces and was designated minister of local self-government and public health.

Following India’s freedom from British occupation in 1947 she entered the diplomatic service and became India’s ambassador to the Soviet Union from 1947 to 1949, the United States and Mexico from 1949 to 1951, Ireland from 1955 to 1961 (during which time she was also the Indian High Commissioner to the United Kingdom), and Spain from 1958 to 1961.

She came out of retirement in 1977 to campaign against Indira Gandhi and helped the Janata Dal win the 1977 election. She was reported to have considered running for the presidency, but Neelam Sanjiva Reddy eventually ran and won the election unopposed.

In 1979, she was appointed the Indian representative to the UN Human Rights Commission, after which she retired from public life. Her writings include The Evolution of India (1958) and The Scope of Happiness: A Personal Memoir (1979).

With twelve solo victories and four shared kills over a total of 66 combat missions, over about two years of missions, she was the first female fighter pilot to shoot down an enemy plane, the first of two female fighter pilots who have earned the title of fighter ace, and the holder of the record for the greatest number of kills by a female fighter pilot. She was shot down near Orel during the Battle of Kursk as she attacked a formation of German planes.