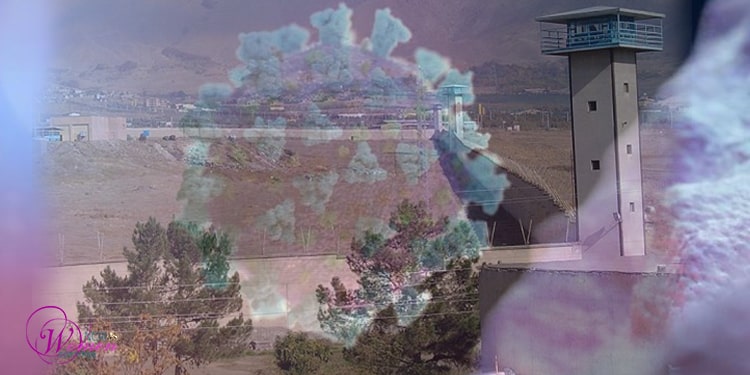 The Spread of Covid-19 in the Women’s Ward

The Spread of Covid-19 in the Women’s Ward of Urmia, Sepidar, and Qarchak

The deteriorating situation in women’s ward in Iran’s prisons is of tremendous concern, especially in the current situation in which the Coronavirus has spread across the country and most of the provinces are shown in red. Red is the highest category on the Islamic Republic’s Coronavirus risk scale. According to figures released by the Iranian Resistance, the death toll from the Coronavirus in Iran has surpassed 90,000.

The regime and its prison officials have failed to provide even the most basic health and care facilities for prisoners and refuse to grant them leave or temporary release. The Iranian Resistance has repeatedly called for prisoners’ release, especially political prisoners, even as a temporary measure, until the end of the pandemic.

The Iranian Resistance has also stressed the need to send an international fact-finding mission to visit prisons and meet with prisoners, especially political prisoners.

This report summarizes the deteriorating conditions of prisoners in the women’s ward of Urmia, Sepidar of Ahvaz, and Varamin’s Qarchak Prisons.

The Central Prison of Urmia, known as Darya Prison, is located on the Urmia-Tabriz road, 15 kilometers from the center of Urmia. With 17 wards, this prison holds defendants, political and security convicts, and people accused of common crimes.

The death rate due to illness in Urmia prison is high and has increased due to the Coronavirus. This prison is among those in which prisoners have reported many cases of Covid-19.

In April 2020, Fatemeh Alizadeh, 53 from Kermanshah, died in the women’s ward of Urmia Central Prison due to the Coronavirus.

According to recent reports, four women prisoners in the women’s ward of Urmia Prison became infected with the Coronavirus in the first weeks of August.

Mohabbat Mahmoudi, Fatemeh Mirabi, Simin Seidi, and Donya Piri were quarantined in a room in the women’s ward of Urmia Prison after they displayed Coronavirus symptoms. On August 15, 2020, these detainees were taken to a hospital in Urmia to undergo a Covid-19 test. However, they were sent back to prison because they were unable to pay for the test.

Following the detection of Coronavirus symptoms in the four detainees, prison officials quarantined them in solitary confinement for about a week. They transferred them to a public ward a week later, instead of providing them with minimal medical care and facilities.

Donya Piri’s condition has been deteriorating steadily since August 16, 2020, and prison officials forcibly transferred her to a hospital outside the prison.

Dozens of prisoners in the women’s ward of the Central Prison of Urmia went on hunger strike on Tuesday, August 18, 2020. The hunger strike was to protest lack of sanitary resources and equipment in prison as well as the authorities’ negligence in preventing the spread of the coronavirus in prison. These prisoners have announced that if hygienic services are not improved in prison, they would once again go on hunger strike.

The prisoners detained in the women’s ward of Urmia Prison had previously held a hunger strike on March 28, after the death of Fatemeh Alizadeh with similar demands. They also protested the authorities’ failure to release them temporarily during the coronavirus crisis.

Ahvaz Sepidar Prison was established in 2009. The prison area is 700 square meters. Prison conditions are so bad that when Masoumeh Ebtekar, the deputy of Rouhani for Women and Family Affairs, visited the women’s ward of the prison in January 2019, prison officials could not publish photos of the visit.

Reports from the women’s ward of Sepidar Prison in Ahvaz disclose the prisoners’ shocking conditions. Despite the spread of Covid-19, women are held in overcrowded wards. The city’s brutally hot weather, which rises above 50 degrees Celsius, makes conditions even worse for women prisoners. The air conditioning system is broken. The ward’s authorities do not even provide ventilation fans. Frequent water cut-offs add to the problem.

Given the rapid spread of the Coronavirus, 50 women prisoners became infected. The infected prisoners were kept in quarantine for a short time before being sent back to public wards.

A newly released prisoner from Sepidar’s women ward has described the situations as follows: The sewage system and bathroom are broken. The cells are full of lice, beetles, and other insects. Most days, there are no doctors or nurses available in the clinic.

Suicide attempts are on the rise among women prisoners. After such attempts, they are transferred to medical centers, where the prisoners hope to either live in better conditions or finally die.

Recently, a female prisoner fell to the ground in the bathroom due to weakness and convulsions. Her fellow prisoners waited a full 10 minutes before someone arrived – a woman who was neither a physician nor a nurse. She only glanced at the prisoner and sprinkled water on her face. The prisoners begged the woman to transfer their cellmate to a medical center to receive treatment for her head injuries; her head was swelling as a result of her fall to the ground. The agent’s answer before leaving the place was, “Don’t worry. She will not die”.

Coronavirus: a reason to commit suicide in Qarchak Prison

During the last 10 days of July, three women committed suicide in Qarchak Prison for different reasons, including being infected with Covid-19.

Monireh Bahrami was one of the suicides; she hanged herself with her chador. She had been kept in an undecided status in Qarchak Prison since her arrest in May 2020. She committed suicide after realizing that she was infected with the Coronavirus, fearing the pressure in the prison and the complications of this disease.

Another prisoner committed suicide and lost her life after being transferred to Aminabad Psychiatric Hospital in Tehran.

Two other female prisoners lost their lives due to the Coronavirus in Qarchak Prison’s solitary confinement ward in late March 2020, due to denial of medical care. Many other women prisoners have contracted the virus, but the regime refuses to provide accurate numbers.