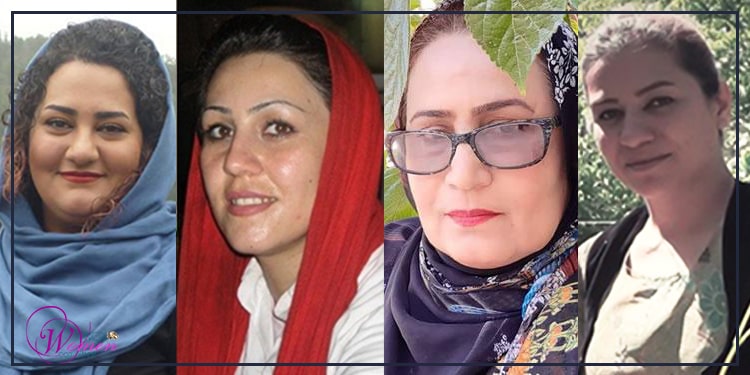 This week’s report addresses the conditions of female political prisoners, including the jail sentence handed down for a women’s rights activist, the summoning and arrest of civil activists and charity workers, and dire conditions of prisoners on hunger strike.

Female political prisoners Maryam Akbari and Atena Daemi will face trial on August 31, 2020. The trial follows new cases fabricated against them during their time in jail.

The two female political prisoners are accused of “disruption of order” in Evin Prison through chanting slogans against the regime.

Maryam Akbari has been in jail for 11 years straight in a row without having a single day of leave. She was arrested on December 31, 2009 and later sentenced to 15 years of imprisonment.

Atena Daemi was sentenced to 14 years in jail by the Revolutionary Court of Tehran on May 15, 2015. The Appeals Court commuted her sentence to 7 years. But before finishing her term, she was sentenced to another 3 years and 7 months of imprisonment following a new case fabricated against her.

The Revolutionary Court of Sanandaj sentenced women’s rights activist Hajar Saeedi to five years of jail sentence suspended for four years. The court convened in the absence of her lawyer.

Hajar Saeedi is accused of participating in illegal gatherings and having contact with labor activists. According to the court’s verdict, she must report in to the Department of Intelligence of Sanandaj every four months.

Hajar Saeedi has been arrested on a number of occasions by security forces, the latest of which was on June 7, 2020.

Touran Haml Zehi is a civil activist from Sistan and Baluchestan who was active in charity work, including giving assistance to impoverished families to build homes. She also worked to recruit and attract more charity workers to build several schools and help flood-stricken victims in January 2020. She is married and has several children.

Shahnaz Sadeghifar and her daughter, 17, on hunger strike

Shahnaz Sadeghifar and her 17-year-old daughter, Aynaz Zare’e, have been on hunger strike since August 13, 2020, in the Central Prison of Urmia. Their protest is to the illegal and arbitrary arrest of Aynaz and her undetermined status in prison, as well as to the heavy 15-year sentence of Shahnaz Sadeghifar.

Mrs. Sadeghifar has two mortar shrapnels in her heart because of having lived in the war zones in the Iranian Kurdistan. She needs to be immediately operated on, but she has been deprived of any medical care. She has previously had a surgery and now, her place of surgery is badly infected.

Implementing the sentence for a protester to the mandatory Hijab

Zahra Jamali, a protester against the mandatory Hijab, was arrested on August 10, 2020, after she reported in to the courthouse in Kangavar. She was transferred to the Dizelabad Prison of Kermanshah to serve her sentence of six months.

In another case, she was sentenced to 91 days in prison, 2 million tomans of fine to be paid in cash, and 548 hours to participate in classes teaching how to observe one’s chastity and Hijab.

Jamali family are very worried about their daughter’s health in prison due to the outbreak of the coronavirus. Zahra Jamali said one of the detainees in the quarantine where Zahra is being held is infected with the virus and she has been taken to a civic hospital.

Zahra Jamali and her sister, Samira Jamali, had produced a video clip in protest to the mandatory Hijab on February 27, 2020, but were subsequently arrested. The two sisters were insulted by security forces who disrespected them and used sexual slurs against them.

Fatemeh Davand: “I do not regret being in the protests”

Political prisoner Fatemeh Davand was transferred to the Central Prison of Urmia on August 6, 2020. For taking part in the November 2019 uprising, she has been sentenced to 5 years and 5 months of imprisonment and 30 lashes.

Fatemeh Davand explained in length what had happened to her during her detention. She said she had been mistreated and harassed in order to extract false confessions from her against her will. When asked to object and appeal for her verdict, she said: “I have already explained in length that these charges are false. I protested and still protest against poverty and destitution. I do not fear prison, but I’m just worried for my children. I still protest to being poor… I do not regret having taken part in the protests.”

Zahra Rahimi, general director of Imam Ali NGO was summoned to the court on August 15, 2020. A number of members of this charity group were also arrested. During the 50 days since their arrests, none of them had any legal attorneys and they had to accept the lawyers appointed by the Judiciary. The NGO’s lawyers said the arrests and detentions were politically motivated.