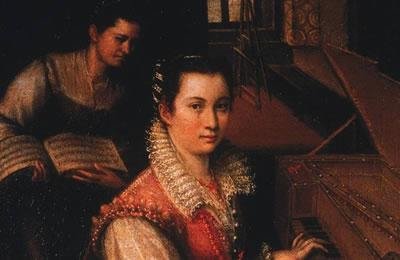 Lavinia Fontana (August 24, 1552 – August 11, 1614) was an Italian painter. She is regarded as the first woman artist, working within the same sphere as her male counterparts, outside a court or convent. She was the main breadwinner of a family of 13.

Lavinia Fontana was born in Bologna, the daughter of the painter Prospero Fontana, who was a prominent painter of the School of Bologna at the time and served as her teacher. Continuing the family business was typical at the time.

Her earliest known work, “Monkey Child”, was painted in 1575 at the age of 23. Though this work is now lost, another early painting, Christ with the Symbols of the Passion, painted in 1576, is now in the El Paso Museum of Art.

She began her commercial practice by painting small devotional paintings on copper, which had popular appeal as papal and diplomatic gifts, given the value and lustre of the metal.

Fontana married Paolo Zappi in 1577. She gave birth to 11 children, though only 3 outlived her. After marriage, Fontana continued to paint to support her family. Zappi took care of the household and served as painting assistant to his wife.

There are over 100 works that are documented, but only 32 signed and dated works are known today. There are 25 more that can be attributed to her, making hers the largest oeuvre for any female artist prior to 1700.