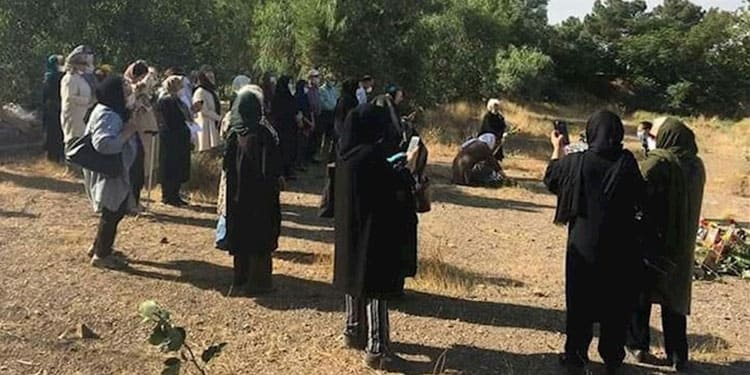 The families and mothers of the victims of the 1988 massacre gathered Friday morning, August 28, 2020, in Khavaran Cemetery southeast of Tehran, to commemorate their loved ones most of whom were forcibly disappeared by the clerical regime in summer 1988.

They laid flowers on the spots which are said to be the mass graves of the victims, recited poems and sang anthems. After an hour, the State Security Force dispersed them out of the cemetery.

The families and mothers of the victims of the 1988 massacre have to overcome many obstacles to visit the symbolic graves of their children in various cemeteries across the country, because the clerical regime has been concealing the evidence of this horrendous crime against humanity for years.

Bodies of the victims of the 1988 massacre never returned

Between late July and September 1988, the Iranian regime carried out coordinated extrajudicial killings intended to eliminate all political opposition. They forcibly disappeared and extrajudicially executed thousands of prisoners for their political opinions and dumped their bodies in unmarked individual and mass graves. The victims were primarily supporters of the People’s Mojahedin Organization of Iran (PMOI/MEK), both men and women.

The Iranian regime authorities did not return the bodies of any of the victims to families. They also refused to tell most families where the bodies were buried.

Asma Jahangir, the Special Rapporteur on the situation of human rights in the Islamic Republic of Iran stated in a report on 14 August 2017, “The bodies of the victims were reportedly buried in unmarked graves and their families never informed of their whereabouts. These events, known as the 1988 massacres, have never been officially acknowledged.”

In a report entitled, “blood-soaked secrets,” on December 4, 2018, Amnesty International wrote the Iranian authorities have never acknowledged the mass graves “publicly and officially.” In most of the country, “families have either remained in the dark about the whereabouts of their loved one’s remains or learnt, through informal contact with officials, cemetery workers or locals, about their burial in confirmed or suspected mass grave sites.”

Officials seek to destroy the evidence of massacre

Thirty years on, the Iranian authorities keep the location of victims’ remains a secret and are destroying suspected or confirmed mass grave sites by bulldozing and constructing new burial plots, buildings or roads over them.

A report by UN Secretary General António Guterres to the General Assembly about the “Situation of human rights in the Islamic Republic of Iran”, dated 31 October 2017, stated: “The Office of the United Nations High Commissioner for Human Rights (OHCHR) continued to receive a large number of complaints from families of the victims of executions which took place in 1988.”

32 years on, the 1988 massacre remains an unpunished crime against humanity, and its perpetrators remain in positions of power and decision-making. The Iranian Resistance has repeatedly called on the world community to end three decades of impunity for the clerical regime leaders in Iran and hold them accountable for their crimes.

Enforced disappearances in Iran continue to this date