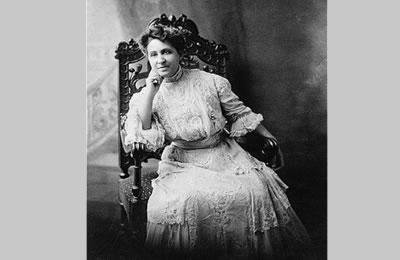 Ruffin was born in Boston, Massachusetts, to John St. Pierre, of French and African descent from Martinique, and Elizabeth Matilda Menhenick from Cornwall, England.

Her father was a successful clothier and founder of a Boston Zion Church. She attended public schools in Charlestown and Salem, and a private school in New York City because of her parents’ objections to the segregated schools in Boston.

A group of these women, Howe and Stone also founded the New England Women’s Club in 1868.

Josephine Ruffin was its first bi-racial member when she joined in the mid-1890s.

She died of nephritis at her home on St. Botolph Street, Boston, in 1924, and was buried in Mount Auburn Cemetery, Cambridge

Mary (Putnam) Jacobi, physician, was born in England of American parents in 1842; the family returned to New York in 1848, where she was educated privately and in public school.

She attended the New York College of Pharmacy, graduating in 1863, and received her M.D. from the Female (later Women’s) Medical College of Pennsylvania.

In 1868, Jacobi became the first woman to gain admission to the Ecole de Medecine, Paris; she was graduated in 1871 with honors, receiving a bronze medal.

She crusaded for the integration of clinical and laboratory studies. Disparaging anecdotal evidence and traditional approaches, she demanded scientific research on every question of the day. As a leading feminist, she rejected the traditional wisdom about the weaknesses of women.

Her work with reformers and suffragists made her a leading spokesman for women’s health during the Progressive Era.

Her marriage in 1873 to Abraham Jacobi, physician, was followed by the birth of three children, of whom only her daughter Marjorie survived. Jacobi died in 1906 of a brain tumor.