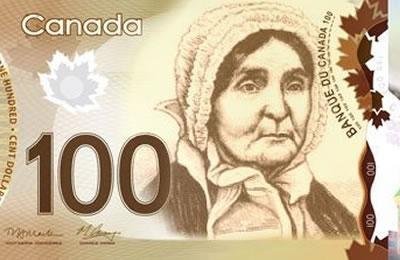 Laura Secord (September 13, 1775 –October 17, 1868) was a Canadian heroine of the War of 1812. She is known for having walked 20 miles (32 km) out of American-occupied territory in 1813 to warn British forces of an impending American attack. Her contribution to the war was little known during her lifetime, but since her death she has been frequently honoured in Canada.

Laura Secord’s father, Thomas Ingersoll, lived in Massachusetts and fought on the side of the Patriots during the Revolutionary War (1775–1783). In 1795 he moved his family to the Niagara region of Upper Canada after he had applied for and received a land grant. Shortly after, Laura married Loyalist James Secord, who was later seriously wounded at the Battle of Queenston Heights early in the War of 1812.

While he was still recovering in 1813, the Americans invaded the Niagara Peninsula, including Queenston. During the occupation, Secord acquired information about a planned American attack, and stole away on the morning of 22 June to inform Lieutenant James FitzGibbon in the territory still controlled by the British.

The information helped the British and their Mohawk warrior allies repel the invading Americans at the Battle of Beaver Dams. Her effort was forgotten until 1860, when Edward, Prince of Wales awarded the impoverished widow £100 for her service on his visit to Canada.

Laura Secord has taken on mythological overtones in Canada. Her tale has been the subject of books, plays, and poetry, often with many embellishments. Since her death, Canada has bestowed honours on her, including schools named after her, monuments, a museum, a memorial stamp and coin, and a statue at the Valiants Memorial in the Canadian capital.