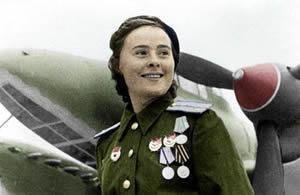 Born in 10 May 1909 in Kharkiv, in the Kharkov Governorate of the Russian Empire (present-day Ukraine

She flew many types of aircraft and set seven world records including one for highest altitude reached by a female pilot on a two-seater seaplane, 3,267 meters (10718.5 feet) on 15 October 1937, (FAI Record File Number 121.16) three speed records and one for long-distance flying between Moscow and Aktyubinsk together with Marina Raskova.

On September 24–25, 1938, as the commander and along with Marina Raskova and Polina Osipenko, she completed the 5,908.61 kilometers (3,671.44 miles) flight of the Rodina (Russian for “Motherland”) on the Antonov ANT-37, setting an international women’s record for a straight-line distance flight.

In 1930. The following year she started to work in the Aero Navigation Laboratory of the Air Force Academy as a draftswoman. Raskova became a famous aviator as both a pilot and a navigator for Russia in the 1930s. She was the first woman to become a navigator in the Soviet Air Force in 1933. A year later, she started teaching at the Zhukovskii Air Academy, also a first for a woman. In 1935, she divorced. As significantly in the eyes of the Soviet Union, which gave its aviators celebrity status, she set a number of long distance records. Most of these record flights occurred in 1937 and 1938, while she was still teaching at the air academy.

The most famous of these records was the flight of the Rodina (Russian for “Motherland”), Ant-37 – a converted DB-2 long range bomber, on September 24–25, 1938. She was the navigator of the crew that also included Polina Osipenko and Valentina Grizodubova. From the start, the goal was to set an international women’s record for a straight-line distance flight. The plan was to fly from Moscow to Komsomolsk (in the Far East). When finally completed, the flight took 26 hours and 29 minutes, over a straight-line distance of 5,947 km

On October 28, 1937, Valentina Grizodubova flew non-stop with Marina Raskova on an AIR-12 for a world record for women’s long distance non-stop flight.

On September 24-25, 1938, Grizodubova with Marina Raskova and Paulina Ossipenko set another world record with their non-stop flight of 5,900 km from Moscow to Siberia in an ANT-37.

1967 – President Lyndon B. Johnson issued Executive Order 11246 prohibiting sex discrimination in employment by the federal government and by federal contractors.

This Executive Order added the category “sex” to the anti-discrimination provisions covered in Johnson’s earlier Executive Order 11246 of September 24, 1965, which addressed discrimination on the basis of race, color, religion, or national origin. It went far beyond earlier civil rights legislation. Unlike the Equal Pay Act of 1963, it applied to those working in administrative, executive, and professional positions. Unlike the Civil Rights Act’s Title VII, it did not exclude teaching personnel.

The order provided that the Civil Service Commission (CSC) would be able to hear complaints of sex-based discrimination from employees of the federal government one month after the order was issued. As of one year after its issuance, it authorized the Bureau of Labor to investigate and address similar complaints from those employed by government contractors