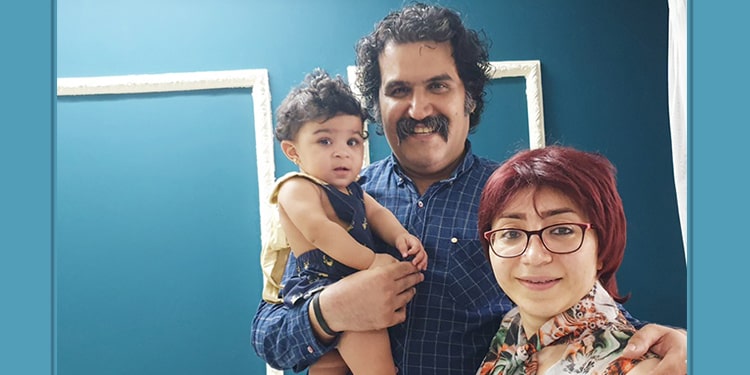 Lydia and her Christian parents, Sam Khosravi and Maryam Fallahi

An Iranian regime court issued an inhuman ruling to separate a 2-year-old toddler from her Christian parents despite her “strong emotional bonds.” The little girl was subsequently separated from her parents and handed over to the Welfare Organization.

The 2-year-old toddler called Lydia was born Muslim but adopted by a Christian couple when she was only ten weeks old.

The Revision Court of Bushehr ruled on September 23, 2020, that since the little girl was born Muslim she could not be adopted by a Christian couple.

The court ruling came despite the “strong emotional bonds” between the 2-year-old toddler and her Christian parents, Maryam Fallahi and Sam Khosravi.

Lydia suffers from heart and GI problems. She would face an uncertain future if sent to the orphanage of the Welfare Organization. It is unlikely that any other family would adopt her due to her illness.

Maryam Fallahi worked for years as a nurse in the Heart Hospital of Bushehr. The Welfare Organization’s observer and the Forensics Office confirmed that she had taken best care of Lydia over the past two years.

The ruling contradicts the laws of the clerical regime.

According to Article 3 of the Law to Protect Children and Adolescents, children who do not have guardians or have unfit guardians, could be adopted by all Iranian nationals residing in Iran. The Article does not mention any consideration regarding the faith of the parents adopting the child.

Maryam Fallahi and her husband, Sam Khosravi, were among a group of seven Christian converts arrested by Intelligence agents on July 1, 2019.

The Revolutionary Court of Bushehr sentenced Maryam Fallahi to the payment of 80million Rials in financial penalty and permanent dismissal from public service.

Sam Khosravi was sentenced to one year in prison and deprived of living in Bushehr for two years.