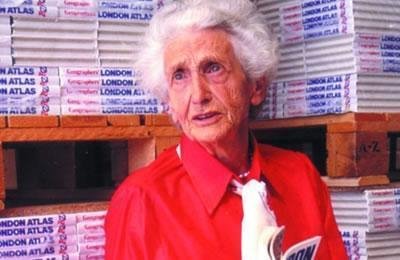 In 1966, she turned her company, the Geographers’ A–Z Map Co, into a trust to ensure that it was never bought out. This secured the future of her company and its employees. Through her donation of her shares to the trust, she was able to enshrine her desired standards and behaviours for the company into its statutes.

The ‘A to Z’ type-style for street names was for decades a conspicuously hand-drawn sans-serif. She designed the type for a few children’s encyclopaedias and some other titles, though her slant was always toward publishing.

She wrote about her early days in from Bedsitter to Household Name, published by her own company. She was awarded an MBE in HM The Queen’s birthday honours of 1986.

She was involved with the company she founded, as well as painting prolifically, until her death.