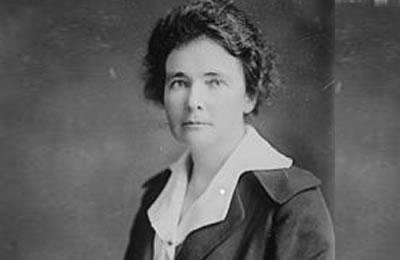 1875 – Anne Henrietta Martin, suffragist, author, first woman to run for US Senate in 1918

In 1918, representing Nevada, Martin was the first American woman to run for the US Senate. Martin’s campaigns focused on illuminating how women could act as a positive influence in the political world. Her platforms focused on providing better working conditions for men and women and nationalization of railroads and public utilities. Between her 1918 and 1920 campaigns Martin wrote a series of articles and essays and in these essays Martin urges women to form autonomous political organizations

Martin moved to Carmel, California in 1921, and recuperated from a heart attack in 1930. In the 1940s, she received an honorary Doctorate of Laws from the University of Nevada (1945); and wrote two articles for the Encyclopedia Britannica (Josephine Butler, 1944 edition; and White Slavery, 1948 edition). Martin, pacifist and suffragist, died in Carmel in 1951.