October 5, the World Teachers’ Day is a day for countries to honor teachers and their valuable services. Like other working sectors, the situation of teachers in Iran is way below the minimum international standards. The clerical regime’s officials do not appreciate and respect the work of teachers in Iran, half of whom are women.

The following article briefly reviews the inhuman job conditions of teachers in Iran.

Different classifications of teachers in Iran

Unofficial teachers are hired by intermediary private companies on temporary contracts. They have different names but all of them are literally exploited by the regime. Their salaries are way below the minimum wage set by the Labor Ministry. At the same time, they do not receive any benefit, insurance, overtime fee, etc. for long hours of hard work.

Casual teachers, teachers selling their services, and outsourcing teachers are the main groups of unofficial teachers in Iran. Along with retired teachers and conscript soldiers, unofficial teachers teach the classes in public schools. They compensate for a large part of the shortage of the Education Ministry’s workforce but are never officially employed.

An Education Ministry official said they used six methods to fill for the teaching vacancies in 2020-2021 academic year. The official was Ali Allahyar Torkaman, the ministry’s deputy for planning and development of resources.

Torkaman said they filled some of the vacancies with unobligated official and casual teachers. Another part was filled by 58,000 freelance casual teachers and around 3,600 conscript soldiers. Some 11,000 of school assistant principals who must teach 10 hours a week according to the law, were also included. Some 16,000 teachers who sell their educational services and retired teachers filled rest of the vacancies. (The official IRNA news agency – September 12, 2020)

The poverty line and the salaries of teachers in Iran

Teachers in Iran are not able to earn their living without a second and even a third job. The salaries of all types of teachers are below the poverty line of 10 million Tomans. (The state-run Donya-e Eghtesad newspaper – September 25, 2020) In determining the amount of salaries of teachers in Iran, the regime does not account for the high inflation rate.

This is while the minimum wage set by the Labor Ministry this year is 1.9 million Tomans.

Working through contractor companies is a common economic practice under the clerical regime. The practice has expanded to prevail over the health and education sectors, as well.

Usually, an intermediary private company hires the outsourcing teachers and the teachers who have to sell their services.

The company receives some money from the Education Ministry. It pays the salaries of these teachers, only after taking away its own share. As a result, only a small portion of the money remains to pay the teachers.

Teachers’ salaries are even less than the minimum wage set by the Labor Ministry.

Very often, the teachers hired on temporary contracts receive less than 1 million Tomans per month. The maximum salary they receive is around 1.5 million Tomans.

Outsourcing teachers receive between 3 to 10 thousand Tomans for every hour of teaching. They do not have job security and their insurance is incomplete. They receive no salary or insurance for new year holidays, summer, official holidays, and unpredicted shutdowns of schools.

The companies hiring the outsourcing teachers usually do not pay their meager salaries at the end of each month. It often happens that they have to go on teaching without receiving any salary for several months.

Some of the outsourcing teachers have to travel long distances to the schools where they teach. They have to pay heavy travel expenses while their salaries are hardly enough to pay for their basic living needs.

Less than one dollar a day for outsourcing teachers

The annual salary of an outsourcing teacher is equal to the monthly salary of one or two officially employed teachers.

She said: “Outsourcing teachers have been cooperating with the Education Ministry since 2009. They have B.S., M.S. and even doctorate degrees but teach in public high schools. Their salaries are the lowest. They receive about 3 to 8 thousand Tomans for every hour. This means that they earn between 24 and 30 thousand Tomans for 8 hours of teaching in one day.”

Under the bankrupt economy of the mullahs, every dollar is exchanged for 30,000 Tomans. So, the outsourcing teachers in Iran receive a maximum of one dollar for an entire day of work.

Outsourcing teachers do not receive a copy of or even see their contract paper. They do not receive any benefits, for example, the new year bonus. Even their work experience in not considered in paying them.

Most of these teachers are heads of the household and have to support their families.

In some provinces, outsourcing teachers have not received any salary for two years.

The state-run Tasnim news agency reported that outsourcing teachers receive less than the salary of the school’s janitor. They receive only 3.5 million Tomans in the entire school year.

Another Education Ministry official, Alireza Kamareii, said the ministry had not paid 162 billion Tomans of salaries of outsourcing teachers.

The annual salary of teachers teaching in the so-called non-profit schools is below one million Tomans. They use terms such as “slave,” “stepchild,” and “exploited” to describe their situation.

Many of these teachers do not receive any salary from April to September. If they are older than 45, they are not called to work.

They are selected by the Ministry of Education. They say they work just as much as the officially employed teachers and have even greater output. But they do not enjoy the minimum benefits including insurance, access to the Educators’ Fund, housing loans, shopping coupons, etc.

There are 200,000 of these teachers in Iran who teach in 16,700 private schools which are deceptively branded as non-profit.

Over three decades, the teachers of non-profit schools have signed the graduation diplomas for thousands of students. The Ministry of Education, however, does not accept any responsibility for these teachers. (The state-run Asriran.ir, September 22, 2020)

Many of the teachers working in non-profit schools have high educational degrees. Atefeh is one such teacher. She has a Master’s degree in math. “Many of our colleagues have Master’s degrees,” Atefeh said. She added, “I know a considerable number of them who are either PhD students or have earned their PhDs. But their salaries are less than 500,000 Tomans a month.”

Ten years of experience with monthly pays under 1 million Tomans

Nahid is 34 years old. She has been teaching for eight years in non-profit schools in Kurdistan province. She says, “I started my work as a full-time teacher in 2013 with a monthly salary less than 400,000 Tomans.”

Another teacher said: “I receive 750,000 Tomans every three months (i.e. 250,000 a month)! I have to work in three other schools and private classes. I have work hard all day long to earn as much as simple porter.”

The average tuition of every student in a non-profit school is around 5 million Tomans. Every class has an average of 26 students. By doing a simple math, it becomes clear that the school managers earn some 130 million Tomans a year. But only a petty share of this revenue goes out to the teacher.

Farideh has 11 years of experience teaching in the schools of East Azerbaijan Province. She has received insurance for only 3 years of those 11 years. Last year, she earned around 900,000 Tomans a month. This year, her salary was raised to 1.1 million Tomans, still way below the minimum wage and the poverty line.

Fatemeh has 14 years of experience. She has been teaching full-time in non-profit schools in Isfahan Province on an hourly basis.

Coronavirus added to the problems of teachers in Iran

The pandemic has added more problems to the numerous problems of teachers in Iran. Most of them must remain online round the clock. 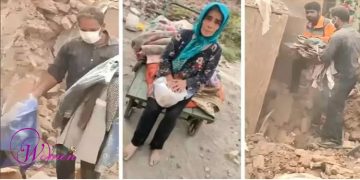 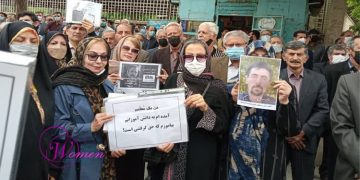 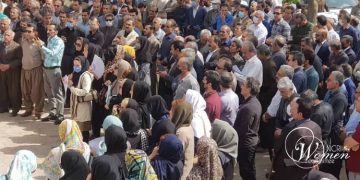 Several dozens of teachers were arrested during a peaceful gathering in Tehran on April 21, 2022. Mohammad Habibi, the spokesman of the Teachers’ League in Tehran and a... 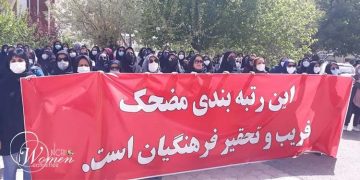