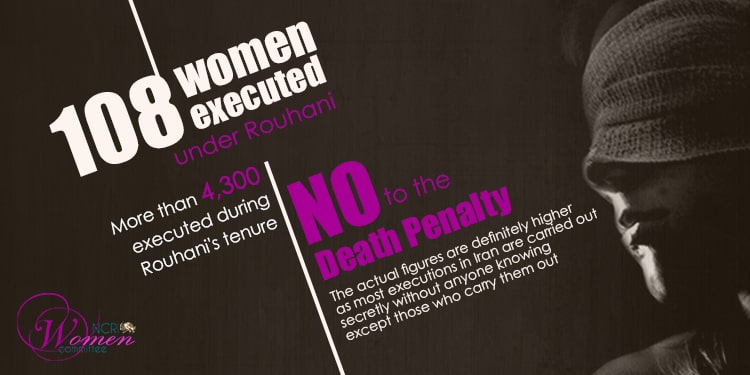 Death penalty in Iran under the mullahs’ misogynistic dictatorship

October 10 is World Day Against the Death Penalty. More than 140 countries have agreed to abolish the death penalty, according to Amnesty International. The Iranian regime, however, holds the world record for both executions of women and the highest per capita execution rate. Death penalty in Iran is the means for the clerical regime’s survival.

During Rouhani’s 7 years in office, more than 4,300 people have been executed in Iran. Of these victims, 108 were women, and at least 38 were juvenile defendants.

Among the reasons for the execution of women in Iran are the widespread prevalence of domestic violence, deprivation of the right to divorce, poverty, and forced early marriages. Vulnerable women are, in fact, victims of defending their fundamental rights and human dignity.

In this regard, the Special Rapporteur on Human Rights in Iran, Javaid Rehman, stated in his report to the 2020 General Assembly, “The Special Rapporteur is concerned about the high execution figures in the Islamic Republic of Iran and the application of death sentences in cases amounting to the arbitrary deprivation of life.”

“The International Covenant on Civil and Political Rights and the Convention on the Rights of the Child prohibit in absolute terms the imposition of the death penalty for crimes committed by persons aged under 18 years at the time of the alleged offense. Nevertheless, under Iranian law, the death penalty can be imposed against girls as young as 9 and boys as young as 15 lunar years for qesas (retribution in kind) or hudud crimes (crimes for which punishments are mandated and fixed), such as homicide and adultery.”

Women, advocates for the abolishment of the death penalty in Iran

The death penalty violates the Third and Fifth Principles of the Universal Declaration of Human Rights. This punishment, synonymous with the legal killing of human beings by governments, is both a violation of the “right to life” represented by the Third Principle and a violation of the Fifth Principle, which states, “No one shall be subjected to torture or to cruel, inhuman or degrading treatment or punishment.”

Many women activists have been sentenced to long prison terms for demanding abolishment of the death penalty in Iran. Female political prisoners have repeatedly called from inside prison for the inhumane sentence to be overturned.

Maryam Akbari Monfared, along with Golrokh Ebrahimi Iraee and Atena Daemi, faced a fabricated case by the Ministry of Intelligence in September 2018 after protesting the execution of three Kurdish political prisoners.

Political prisoner Atena Daemi said, “What an honor to receive another prison sentence for my opposition to the death penalty and for defending humane living.”

No to execution, No to the mullahs

Mrs. Maryam Rajavi, President-elect of the Iranian Resistance, said in a speech on September 18, 2020, “If Khamenei were to stop executions, he would lose control of the situation and uprisings simmering in the depths of Iranian society would erupt and overthrow the mullahs’ religious fascism… The Coronavirus is the mullahs’ strongest ally; imprisonment and executions are their most essential instruments of power; and the Islamic Revolutionary Guard Corps (IRGC) is the most reliable killing machine to prop up their rule.”

She had previously stated in a speech at the World Day Against the Death Penalty Conference on October 10, 2015, “The existence and rule of this regime depend on executions because…without executions, how and by what means could the mullahs deny people their freedoms and instead step up suppression, intimidation, and all sorts of restrictions into the most private aspects of people’s lives?”

Ms. Rajavi also stated, “The Iranian Resistance declared years ago that it calls for the abolition of the death penalty and an end to torture and all forms of rights abuses in Iran. Our plan is to revive friendship, conciliation, and tolerance. Our plan for the future is to put an end to the mullahs’ religious decrees. We reject the inhumane penal code and other abusive laws of this regime. We believe retribution is an inhumane law. We advocate for laws that are based on forgiveness, compassion, and humanity.”

On World Day Against the Death Penalty, the NCRI Women’s Committee salutes defenders of the abolition of the death penalty in Iran and praises their efforts to achieve freedom.

The NCRI Women’s Committee also appeals to the international community to compel the Iranian regime to stop their widespread use of the death penalty in Iran, especially against women; and rescind all related decrees.

The NCRI Women’s Committee further calls on the international community to focus more attention on the deplorable situation of the women on death row in Iran.