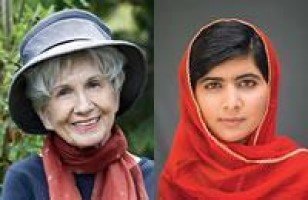 Alice Ann Munro born 10 July 1931 is a Canadian author. Munro’s work has been described as having revolutionized the architecture of short stories, especially in its tendency to move forward and backward in time. Her stories have been said to “embed more than announce, reveal more than parade.”

Munro’s fiction is most often set in her native Huron County in southwestern Ontario. Her stories explore human complexities in an uncomplicated prose style. Munro’s writing has established her as “one of our greatest contemporary writers of fiction,” or, as Cynthia Ozick put it, “our Chekhov.” Munro is the recipient of many literary accolades, including the 2013 Nobel Prize in Literature for her work as “master of the contemporary short story”, and the 2009 Man Booker International Prize for her lifetime body of work. She is also a three-time winner of Canada’s Governor General’s Award for fiction and was the recipient of the Writers’ Trust of Canada‘s 1996 Marian Engel Award, as well as the 2004 Rogers Writers’ Trust Fiction Prize for Runaway.

Malala Yousafzai born 12 July 1997 is a Pakistani activist for female education and the youngest-ever Nobel Prize laureate. She is known mainly for human rights advocacy for education and for women in her native Swat Valley in the Khyber Pakhtunkhwa province of northwest Pakistan, where the local Taliban had at times banned girls from attending school. Yousafzai’s advocacy has since grown into an international movement.

Her family runs a chain of schools in the region. In early 2009, when she was 11–12, Yousafzai wrote a blog under a pseudonym for the BBC detailing her life under Taliban occupation, their attempts to take control of the valley, and her views on promoting education for girls in the Swat Valley. The following summer, journalist Adam B. Ellick made a New York Times documentary about her life as the Pakistani military intervened in the region. Yousafzai rose in prominence, giving interviews in print and on television, and she was nominated for the International Children’s Peace Prize by South African activist Desmond Tutu.

On the afternoon of 9 October 2012, Yousafzai boarded her school bus in the northwest Pakistani district of Swat. A gunman asked for her by name, then pointed a pistol at her and fired three shots.

In the days immediately following the attack, she remained unconscious and in critical condition, but later her condition improved enough for her to be sent to the Queen Elizabeth Hospital in Birmingham, England, for intensive rehabilitation. On 12 October, a group of 50 Islamic clerics in Pakistan issued a fatwā against those who tried to kill her, but the Taliban reiterated their intent to kill Yousafzai and her father.

The assassination attempt sparked a national and international outpouring of support for Yousafzai.

In February 2014, she was nominated for the World Children’s Prize in Sweden. In May, Yousafzai was granted an honorary doctorate by the University of King’s College in Halifax. Later in 2014, Yousafzai was announced as the co-recipient of the 2014 Nobel Peace Prize for her struggle against the suppression of children and young people and for the right of all children to education. Aged 17 at the time, Yousafzai became the youngest-ever Nobel Prize laureate.