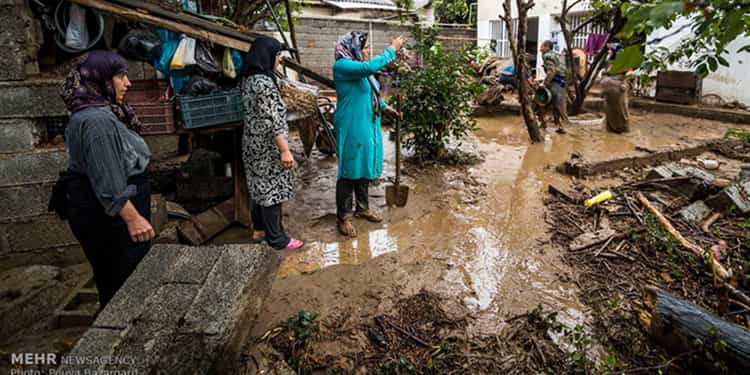 Risk of natural disasters in Iran has increased rather than reduced due to regime’s profiteering.

October 13, International Day for Disaster Reduction, was first observed in 1989 at the United Nations. This day is celebrated to raise awareness of the importance of controlling the dangers of natural disasters.

The program emphasizes explicitly that schools and hospitals should be built according to standards that can withstand climate hazards. Basic services include rescue equipment, food and water supply, energy, communications infrastructure, and transportation.

However, for the Iranian people, who have faced numerous, horrific natural disasters in Iran over the past three years, there is no trace of global goals.

Regime officials routinely ignore international infrastructure standards. Instead of effectively implementing standards, they use natural resources for their own profit, exacerbating disasters. The regime imports non-standard construction materials and destroys existing old infrastructure as well as natural disaster-reducing barriers. This regime also leaves people empty-handed in the face of adversity in times of disaster.

The head of the Iranian Environmental Protection Organization, Isa Kalantari, has admitted that “during these years, if any enemy ruled in this land, it would not have done (what this regime has done) to the country’s natural resources and environment. Every disaster that has befallen the environment has taken place over the past four decades. Before that, many indicators of the country’s environment, such as water, were in a good position” (The state-run ISNA news agency – October 15, 2017).

Natural disasters in Iran since the beginning of this year

Destructive natural disasters occurred in Iran, one after another, in 2020. People, especially Iranian women, have been facing severe economic hardship since last winter due to the outbreak of the Coronavirus.

However, they were left completely defenseless and helpless in the face of these disasters. The mullahs’ looting, corrupt regime abandoned all its responsibilities to the people and did nothing to help the victims.

It should be noted that women are the primary victims of the regime’s despised policies in the face of natural disasters in Iran. In any crisis, victims lose their shelter and living facilities and may have to confront special health and nutrition conditions. These circumstances can make a dignified and healthy life impossible for them, let alone their children, who need support, care, health, and nutrition.

Information about these catastrophes, summarized below, derives from state media reports, which – like all the regime’s statistics and reports – are non-transparent and contradictory.

For example, the September flood completely destroyed 20 houses and damaged another 240. However, only two deaths were reported.

In addition to the regime’s deliberate cover-ups, much of the news of the natural disasters in Iran has not been covered or followed up on by state media; sometimes, it has been overshadowed by news of the extensive spread of the Coronavirus and its high casualties. Therefore, the following information reflects the minimum possible losses and damage of any disaster. However, this information, which only reflects the most significant events published in the press, reflects the horrible picture of the dangers the Iranian people face under the clerical regime.

The Iranian people started the year with floods, just like last year. On April 9, 2020, floods swept through 14 provinces of Iran. By April 14, 2020, the flooding had reached 18 provinces. During these incidents, 41 people were injured due to weather accidents in 17 provinces of the country, and 29 people lost their lives (The state-run ISNA news agency – April 10, 2020).

Heavy rains on July 15, 2020, flooded 21 cities in the provinces of Tehran, East Azerbaijan, Ardabil, Gilan, Mazandaran, and North Khorasan. As a result of the flooding, two people were killed in Ardabil, two in Amol, and one in Rezvanshahr.

The regime announced flood-related damage in only three provinces, estimating the damage at more than 163 billion Tomans.

The city of Talesh in the western part of the northern province of Gilan suffered the greatest damage as a result of this flood. A 65-year-old woman died; 4 homes were destroyed; and 3 kilometers of rural and connecting roads to several villages were blocked.

In addition, some 4 hectares of wheat and barley fields, and several hectares of walnut and hazelnut orchards and watercourses were destroyed. The flood washed away a large amount of fertile soil and destroyed an unknown number of trees.

The second flood in Talesh

On September 20, 2020, just 3 months later, Talesh experienced another flood. According to estimates, there was more than 300mm of rainfall.

Seven villages in this county were flooded. State sources announced that two people had been killed in the incident. The damage caused by this flood was estimated at more than 170 billion Tomans. Roads to 100 villages were blocked.

A landslide occurred on the Asalem-Khalkhal Road, as well as on another 22 rural roads. Some 20 rural homes were destroyed, and 240 houses were damaged.

In addition, more than 100 hectares of farms and gardens – the primary sources of income for local residents – were damaged.

The latest flood in Iran occurred last week. On October 4, 2020, the area experienced 33mm of rain in less than an hour, which caused flooding in the city and the surrounding villages.

More than 100 residential and commercial structures were destroyed.

The Governor of Meshkinshahr estimated the damage to the infrastructure of places, farms, and gardens in the city at more than 150 billion Rials. Meshkinshahr in Ardabil Province had experienced another flood just 2 months earlier. In the last week of July 2020, floods in this city caused 350 billion Rials in damage.

Reza Bayani, Director of the Engineering and Studies Office at the Forest Organization, has revealed that between 2015 and 2020, approximately 12,000 hectares of forests across the country were wiped out every year.

According to Bayani, in the last 5 years alone, 60,000 hectares of the country’s forests have been destroyed due to fire, pests, disease, dams, road construction, other construction activities, and timber smuggling.

Official reports from the Forest Organization say that Iran experienced more than 240 fires in the country’s natural areas in the first quarter of this year (The state-run IMNA news agency – August 26, 2020).

Forest fires – especially in the Zagros forests – have repeatedly broken out in different areas throughout the summer until the present.

The forests and areas of the Deil Mountain Protected Area have been on fire since Friday, May 22, 2020. Bushfire intensified due to provincial officials’ negligence.

On May 29, 2020, Iranian army helicopters arrived – a full week after the start of the fires – to contain the flames. However, the helicopters were not equipped with spray pumps, rendering them useless except to move troops.

Volunteers fought the fire for 10 days without any of the equipment necessary to put out forest fires. The fire was finally contained on June 1, 2020, after 10 hectares of forest and plant species in Gachsaran had been burned.

The fires started on May 28 in the forestland from Behbahan in Khuzestan Province. They were left to rage on as they spread to Kohgiluyeh and Boyer-Ahmad Province.

Another forest fire occurred in the highlands of the no-hunting zones on Dashtestan’s Siah Kuh Mountain on May 27, 2020. The fire, ignited by thunder, left extensive damage to the palm forest during the 3 days it raged. At least 300 palms trees in the area burned before the fire was extinguished on May 30, 2020.

The Director-General of Crisis Management of Kohgiluyeh and Boyer-Ahmad Province admitted that many volunteers were wounded while extinguishing forest fires in the area. He said, “Three people in Khaeez, four in Gachsaran, and two in Deil were injured during the forest fires (The state-run ISNA news agency – June 2, 2020).

Five young male environmentalists died while trying to extinguish the forest fires. One of the volunteers in the Khaeez area, by the name of Alborz Zarei, died of severe burns a few weeks later.

Many of the volunteer firefighters were women who battled the flames selflessly to save Iran’s natural forests. Meanwhile, authorities failed to act.

Roya Janfza, a 19-year-old girl, sustained injuries in both legs after trying to extinguish a fire on the Khaeez mountains.

The latest forest fire occurred on October 5, 2020. It has been spreading as of current writing. As with previous forest fires, residents of Shirbisheh rushed to put out the fire, although they were empty-handed and lacking proper equipment.

On September 25, 2020, the Shirbisheh forest experienced another fire accident that raged for 5 hours, damaging 10 hectares of grassland before being controlled.

Agencies in the mullahs’ regime have been practically absent in the face of the natural disasters that have taken place in Iran. This is a pattern of behavior that the world also witnessed during the previous year’s earthquakes and flash floods.

Regular civilians rushed to help flood and other disaster victims as they fought against the forest fires. Victims of previous years’ disasters are still living in tents or containers.

However, the regime’s function is not limited to inaction. The regime actually produces disasters, or intensifies them, through their nonstandard construction projects that fail to meet common building standards. Filling the watercourse and sub-standard construction were among the factors that exacerbated Iran’s 2019 floods, especially in Shiraz.

Another function of the mullahs’ regime was revealed by the people during the latest flash floods. According to a victim of the recent flooding in Talesh, “unfortunately, construction on riverbeds has not stopped yet, and every year there is more… They [regime officials] destroy vegetation to build their luxurious villas. Some of these structures belong to government officials such as provincial governors, or representatives of regime offices, municipalities, state organizations, and ministries, who come here only for vacations,” he added.

The ongoing development of summer communities is another leading cause of soil erosion, as the construction damages the area’s vegetation and makes it vulnerable to floods, earthquakes, and landslides (The state-run Moroor website – July 15, 2020).

The IRGC’s Khatam‑al Anbiya Construction Headquarters is one of the regime’s agencies that is fully involved in destroying Iran’s environment and natural resources. The company announced in September 2020 that it has 10 trillion Tomans’ worth of construction plans in progress. ‌Building dams is a part of its portfolio of projects (The state-run Young Journalists Club news agency – September 3, 2020).

During its 40 years of rule, the Iranian regime has proved its dictatorial and totalitarian nature. The Iranian people are the primary victims of the regime’s policies at every level, including in natural disasters. The regime that killed 1,500 people in cold blood last year solely for protesting against poverty will never feel remorse about soil erosion and the environment.

This issue is becoming more serious, considering the regime’s catastrophic economic situation. Steve Hank, a Professor of Applied Economics at the Johns Hopkins University in Baltimore, said, “In the Statistical Center of Iran’s 1399 annual report published in September, Iran’s inflation rate is reported to be 26.0%. This is absolutely ridiculous. By utilizing sound science, I measure Iran’s inflation accurately to be a stunning 156%! Iran’s corrupt government produces corrupt ‘facts’.”

It is crystal clear that the mullahs’ regime is drowning in crisis and has neither the will nor the capacity to meet international humanitarian goals.

Iran’s genuine participation in United Nations programs can only be possible when a democratic government gains power in Iran.